One of the stars of the 2009 Lions tour has had his season brought to an abrupt end. [more] 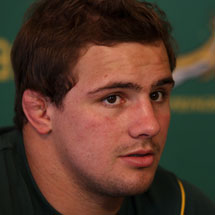 One of the stars of the 2009 Lions tour has had his season brought to an abrupt end.

Springbok flanker Heinrich Brussow faces eight months on the sidelines after suffering a serious knee injury at the weekend.

Brussow tore knee ligaments during the Cheetahs’ Super 14 clash with the Hurricanes in Bloemfontein on Saturday.

The 23-year-old picked up the cruciate injury in the final minutes of his side’s shock 28-12 win over the Wellington-based franchise and was carried from the field on a stretcher.

Brussow, who has been described by Cheetahs coach Naka Drotske as ‘irreplaceable’, will now miss the remainder of the Super 14 season and the Currie Cup, as well as the 2010 Tri Nations and South Africa’s Northern Hemisphere autumn tour.

The news is a huge blow to both the Cheetahs and the Springboks, for whom Brussow was a revelation against Ian McGeechan’s Lions.

Having missed out on a place in the original Springbok squad for the Lions’ series, Brussow starred for his provincial outfit in the 26-24 defeat to McGeechan’s men on June 6 before earning a late call up for the first Test in Durban.

Brussow went on to start all three internationals as the Boks avenged their 1997 series defeat.

He was superb in the first two Tests in particular and has since become a key figure in the Springbok set up.