Davies not scared of Lions duo 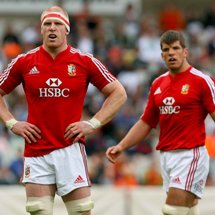 Lions captain O’Connell and fellow double tourist O’Callaghan hold the Irish record for most games played as a second-row partnership in the Six Nations.

The fearsome pair will line up together for their 14th appearance in the championship in Saturday’s clash at Croke Park but Wales lock Davies says he will not be afraid despite having a huge amount of respect for the 2005 and 2009 Lions.

"Paul and Donncha are two world-class players who have done everything in the game,” said Cardiff Blues youngster Davies.

"They have played for the Lions, won the Heineken Cup and the Grand Slam with Ireland.

“Both of them are top players and proven performers and it will be a big challenge.

"But I won’t be scared of facing them. I have always believed in myself and try to let my performances do the talking – I know I can play at this level.

"I’ve faced them before for Cardiff Blues and they bring different qualities to the game.

"Paul is an awesome leader on the field while Donncha does more of the hard graft and work around the field. He is a nuisance but I am ready for the challenge."

Handling the experienced Lions duo on their own turf in Dublin may seem like a daunting challenge for most opponents, but not Davies.

The 23-year-old played against France in the narrow home defeat in Cardiff last month, just a week after mum Cheryl passed away.

National boss Warren Gatland singled out the courageous forward, who wins his ninth cap against the reigning champions, for his brave performance and Davies has revealed the heartache of lining up against Les Bleus.

"Losing my mum was a big shock to everyone and a really tough week for me and my family,” added Davies.

"She was a wonderful and incredible person and mother and I owe her a lot.

"Of course, it was really upsetting before the game but I just wanted to be with the squad rather than crying in the house. The other players made me feel really wanted.

"In the first week, I had the rugby to focus on and the funeral was the hardest day.

"All the Wales and Cardiff Blues lads were there offering their support and that helped me through it."

Davies and his Wales team-mates wore black armbands, had the words ‘In Loving Memory of Mam, Cheryl Davies 1964-2010’ embroidered into their shirts and observed a minute’s silence in tribute to his mother, who died following a sudden illness.

Now Davies, who spent a couple of sessions with Wales psychologist Andy McCann prior to the clash at the Millennium Stadium, has thanked the Welsh nation and coach Gatland for their support ahead of this weekend’s trip across the Irish Sea.

"I gained a huge amount of strength from the Welsh public. The family had 300-400 cards delivered to the house.

"Llantrisant is only a small town but people look after each other. They have been awesome and I’m grateful for their support.

"It was tough during the silence and then the anthems. But then I heard the crowd scream and I knew I had a job to do.

"Warren told me I would be playing if I wanted to and that was a massive boost for me.

"He has built me up slowly but it was nice to play for 80 minutes and do well.

"International rugby is all about taking your chance. If you don’t, then it’s your own fault. I was happy to put in a performance. I love rugby and I just want Wales to win."