Lions friendships put to one side

Martyn Williams insists the close friendships made between Welsh and Irish stars on the 2009 Lions tour will be temporarily forgotten this weekend. [more] 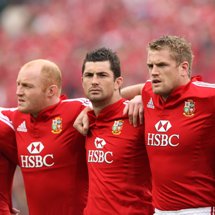 Martyn Williams insists the close friendships made between Welsh and Irish stars on the 2009 Lions tour will be temporarily forgotten this weekend.

Veteran openside Williams was one of 13 Welshman who toured South Africa last summer, with the same number of Irishmen representing Britain and Ireland’s elite on the 10-match adventure.

The two sides go head-to-head in the fourth round of the Six Nations at Croke Park on Saturday and Williams insists it will be business as usual despite the familiarity between so many of the players.

"We all know each other well through playing in the Magners League and, of course, the majority of us were on tour together in the summer,” said Williams, who captains Wales in the absence of 2005 Lion Ryan Jones.

"Everyone got on brilliantly out in South Africa and it has been well documented how good a tour it was off the field.

"But once the whistle has gone on Saturday, it’s largely irrelevant. We have a job to do on the field.”

Williams and Wales were on the wrong end of a narrow defeat when the two sides met in last year’s Six Nations, with Ireland clinching a first Grand Slam for 61 years in Cardiff.

Williams knows first-hand how effective the current Irish team can be and he is expecting an almighty battle once again.

"They know the gameplan and roles in the side inside out. Maybe they haven’t played the best or most entertaining rugby but they have picked up the results.

"I worked alongside them last summer and I know how intelligent they are as players. They are very difficult to break down.

"They have world-class backs, it’s Brian’s (O’Driscoll) 100th game and Tommy (Bowe) is on fire. But we haven’t been playing badly."