Wales and Lions coach Warren Gatland says the Six Nations can turn you from hero to villain or vice versa in an instant. [more] 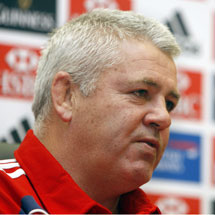 Wales and Lions coach Warren Gatland says the Six Nations can turn you from hero to villain or vice versa in an instant.

Gatland, who was part of the Lions’ coaching team on the summer tour of South Africa, led Wales to a Grand Slam in first season in charge of the Dragons two years ago.

The New Zealander was hailed a national hero for his work in turning Wales from World Cup flops to European Champions in a matter of months.

But since then things haven’t gone quite so well for Gatland and fellow Lions coaches Shaun Edwards and Rob Howley.

Wales have finished fourth in each of the last two Six Nations tournaments, winning just two games this time around.

Defeats to England, France and Ireland and a narrow escape against Scotland saw Gatland come under surprising pressure before a comfortable victory over Italy restored a modicum of the feel-good factor to Welsh rugby.

“The tough thing with the Six Nations is your season is decided in five games. There is no time for you to play your way out of a blip,” said Gatland.

“We are not hiding away from the fact we are disappointed to have finished fourth. We are frustrated and we are a better team than that.

“We let a couple of results slip by but we are not far away from being a good side.

“We are in good shape physically and we have developed some strength in depth.

“You live and die by those five games and potentially you can be a hero in one Six Nations and for whatever reason, could get the sack in the next. But we are aware of that.”

Wales were convincing 33-10 winners over the Azzurri on the final weekend of Six Nations action and Gatland’s own assessment of the performance was a largely positive one.

Despite failing to score a try in the first half for the fifth successive time in the tournament, Wales always looked in control against an Italian side that had already troubled England and beaten Scotland.

“It was a good performance. Italy are a hard team to break down – it took time but in the end it was a comprehensive win,” added Gatland.

“We didn’t score in the first half and we were tired at half time but we knew that they would be in a worse state than us and close to cracking.

“We kept our patience and discipline. We didn’t panic and we didn’t force things and in the end we got the tries.

“Perhaps we could have scored more tries in the last 10 minutes but it was a game that we wanted to get fresh legs and get people involved at the end of the championship. That broke up our rhythm and momentum.

“The fact that we were chasing the game at half time made a big difference as did the return of a couple of world-class players in Gethin Jenkins and Mike Phillips.

“They made a massive difference with their control and experience.”

On This Day
Previous story Yet another Lion at Munster?
Next story Trio lauded by legend