Lions lock Simon Shaw is expected to be back in action in three weeks' time. [more] 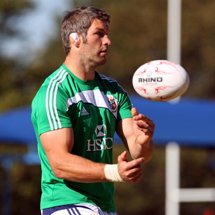 Lions lock Simon Shaw is expected to be back in action in three weeks’ time.

The triple Lions tourist was an injury victim during England’s defeat to France last weekend.

Shaw left the field early in the first half after damaging his right shoulder in the final match of the Six Nations.

He underwent an MRI scan to assess the damage amid fears that he may face a lengthy spell on the sidelines.

His club side, London Wasps, have since released a statement confirming that Shaw injured his Acromioclavicular Joint – an identical injury to the one he sustained in his left shoulder a fortnight earlier against Ireland.

Fortunately for the 36-year-old, who toured with the Lions in 1997 and 2005 before finally winning Lions Test honours last summer, he has responded well to initial treatment.

He is likely to miss Wasps’ Guiness Premiership games with Northampton and London Irish and the Amlin Challenge Cup quarter-final with Gloucester but he could return in time to face Worcester at Sixways on April 17.