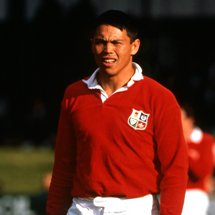 Rory Underwood has lent his support to another Lions legend in current England boss Martin Johnson.

Former Lions skipper Johnson has come under fire for his side’s Six Nations showing but his ex team-mate believes England have the right man at the helm.

Underwood, who was a Lions colleague of Johnson’s in 1993, admits he has been far from impressed with recent England performances but that his former Leicester colleague should be given time to build a winning team.

"Yes, it has been frustrating watching England play at the moment,” said Underwood, who started six successive Tests for the Lions against the Wallabies and the All Blacks.

“Obviously we finished on a high with regards to how we played against France. But I was getting to the stage that, if at the end of the season, if it was going to carry on I was probably going to question wherever England were going. But I am still very hopeful.

"I have been a big supporter of Martin and making him stay until the World Cup.

“Whatever happens bringing in someone at the late stage, you have to think who would take over and would they make any change. As far as I am concerned, you stick with him.

"A bad performance in the summer or the games at home could see him leave – I can’t agree with that and I can’t disagree with that. But personally I feel Martin should be there until the World Cup."

England travel Down Under for five tour games this summer and Underwood feels squad selection will tell the English public a lot about how the team will approach next year’s World Cup.

Underwood, who was just 20 when he made his England debut but went on to play in three World Cups, hopes Johnson gives youth a chance against the Australian Barbarians, the Wallabies and the New Zealand Maori.

"What we have seen this season is a side that has been consistently there or there of thereabouts. There were a few changes for the French game and we will see how it goes on the summer tour," Underwood told PA Sport.

"It will be interesting to see what Martin does with regards to picking the squad which goes down to Australia and whether we start looking at bringing some of the young blood in.

"We need to start looking at getting the team ready with 18 months time in our mind and just accept that if we are going to start blooding some youngsters we are not going to win anything in the first year or two and if we do fantastic, if not, then it’s part of the building process for the World Cup."