The Test No8s on the last two Lions tours experienced contrasting emotions in the Heineken Cup at the weekend. [more] 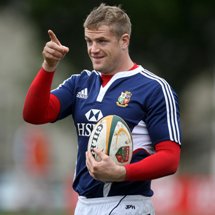 The Test No8s on the last two Lions tours experienced contrasting emotions in the Heineken Cup at the weekend.

Jamie Heaslip, the 2009 Lions Test starter, was man-of-the-match in Leinster’s nerve-wracking European triumph over Clermont Auvergne while 2005 star Jones suffered heartbreak as the Ospreys were pipped by Biarritz in San Sebastien.

Having established himself as one of the world’s leading back-row exponents during the Lions’ summer tour of South Africa, Heaslip continues to cement that reputation with his provincial form.

That was certainly the case on Friday night as his two tries guided reigning Heineken Champs Leinster to a 29-28 win at the RDS.

"We knew Clermont were going to come at us with all guns blazing,” said Heaslip, who started all three internationals for the Lions in June and July last year.

"We wanted to front up, weather the storm and then take our chances when they came. I think we did that and we were good when we had the ball and scored at crucial times.

"I rarely score these days, so I’m happy with my two tries. But we could have got a third try and, had we done so, it would have made it a lot easier for us.

"In the end, they could have won it with that last drop goal. We managed to put enough pressure on them for it to drift just past the post, but it was close."

Unfortunately for Jones and the Ospreys, the boot was very much on the other foot during Saturday’s trip to Spain.

Whereas Brock James’ missed drop goal had given Leinster glory the night before, another unsuccessful drop prevented the Ospreys’ from reaching their first European semi in dramatic circumstances.

A last-minute effort from Ospreys fly-half Dan Biggar fell short of the uprights to leave Biarritz by the same score by which Heaslip and co had seen off Clermont, although numerous summarisers have suggested that referee George Clancy should have taken play back for an earlier penalty that would have given Biggar a second shot at history.

Jones, who was one of the stand-out performers for the Lions five years ago having been called up as a mid-tour replacement, was bitterly disappointed with the last-gasp controversy but he admitted that the result should have been beyond doubt far before the 80th minute.

“We had plenty of other opportunities to have won the game comfortably,” a downcast Jones told Sky Sports after the match.

“We don’t come to arenas like this and get intimidated – we come to be brave and to play.

“I’m heartbroken for my team. We possibly deserved to get more then game. It was two teams going at it hammer and tong.

“I’m always proud of my team and they have played with a lot of heart and courage – but sometimes you need a little bit m ore than that.

“There is still some rugby left this season but our Heineken cup dream is over.”