Ireland's Lions will have another chance to beat their summer conquerors South Africa when the Aviva Stadium opens its doors to international rugby in seven months time. [more] 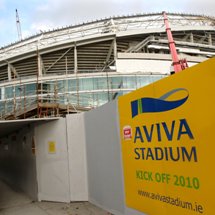 Ireland’s Lions will have another chance to beat their summer conquerors South Africa when the Aviva Stadium opens its doors to international rugby in seven months time.

Having already gained some sort of revenge for the Lions’ summer series defeat with an impressive win over the Springboks at Croke Park in November, Ireland will take on the reigning World Champions at their new home on November 6.

The Aviva Stadium is being built on the site of the old Lansdowne Road and will officially open on July 31 when all four Irish provinces take part in an historic combined fixture.

Magners League outfits Connacht, Leinster, Munster and Ulster will all be involved in celebrating the completion of Ireland’s new national arena some three-and-a-half years after building work began.

Connacht and Munster will join together to take on a Leinster and Ulster side on as Irish rugby moves from its temporary Croke Park home to the site of the old Landsdowne Road.

"This promises to be a great occasion to open the Aviva Stadium to the Irish rugby public," said Philip Browne, the chief executive of the Irish Rugby Football Union when talking about the combined fixture.

"It was felt that a combined provinces fixture would be the most appropriate way to do this, providing a look back into the history of the game while also creating a new chapter for Irish rugby."

Leinster and Ulster were the first representative teams to play at the old Lansdowne Road nearly 133 years ago on December 16, 1876.

Both provinces were also on hand to play the final game, ‘The Last Stand’, at the world famous stadium on New Year’s Eve 2006, when Leinster beat Ulster 20-12 in the Magners League.

After facing South Africa on the first Saturday in November, Ireland will then face Samoa, New Zealand and Argentina on successive weekends before the stadium hosts its first Six Nations game on February 13, 20111 when Grand Slam winners France will be the opposition.