Lion could return at last 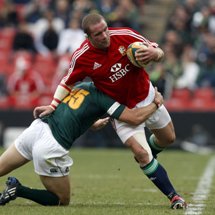 The double Lions tourist has been sidelined for five months with a neck injury.

After featuring in the Test series against the Springboks on the Lions’ 2009 tour of South Africa, Vickery has played just three times this season.

The 34-year-old, who won three Lions Test caps on the 2001 tour of Australia, underwent neck and shoulder surgery in October.

That was the fourth time Vickery had been under the knife for similar problems, with some observers suggesting the former Gloucester and now London Wasps star would never play again.

But those fears now appear premature, with Vickery in line for a return to the game in Saturday’s Guinness Premiership clash with Worcester.

If he successfully gets through full training for the rest of this week, Vickery should be involved in the Sixways fixture as Wasps look to continue a push for the Premiership play offs.

With Wasps having between four and seven matches left this season depending on their success in domestic and European competition, Vickery will be hoping to prove his fitness to England team manager Martin Johnson ahead of the summer tour of Australasia.

Vickery has missed a total of eight Tests since returning from his second Lions adventure having stat out the autumn series and the entire Six Nations.