One of the Lions' opponents on the 2009 tour of South Africa still have their sites set on entry into the Super 15 despite missing out for 2011. [more] 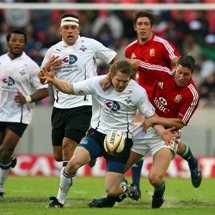 One of the Lions’ opponents on the 2009 tour of South Africa still have their sites set on entry into the Super 15 despite missing out for 2011.

The Southern Kings faced the Lions in the final game before the Test series against the Springboks last summer, with Sir Ian McGeechan’s tourists running out 20-8 winners in Port Elizabeth.

The Kings had been hoping to secure a place in the southern hemisphere’s premier domestic competition for the inaugural Super 15 season next February but they missed out to Melbourne Rebels in the quest for the final spot.

But despite that disappointment, the Southern Kings haven’t given up hope of Super 15 role, with the team’s officials snow targeting a place in the 2012 competition.

There are suggestions that the continuing poor form of South Africa’s two bottom-end franchises, the Cheetahs and the Lions, could lead to the Kings being brought in as a replacement side in two years’ time.

Both the Cheetahs and the Lions, who like the Kings faced Britain and Ireland’s elite last summer, have struggled to impress in the 2010 competition.

They currently occupy the last two spots on the Super 14 ladder with the Cheetahs having won just twice in eight matches and the Lions yet to record a single victory this season.

Although there have been no firm plans put in place, there has been talk of a play-off between the last-placed South African team and the Southern Kings to see who would enjoy the fifth franchise position for the 2012 campaign.

The Eastern Cape area of South Africa where the Southern Kings are based has long been seen as the breeding ground of young black talent, with officials admitting that the area has a key role to play in the South African Rugby Union’s policy of transformation.