British & Irish Lions outside half Stephen Jones has pledged his future to the Scarlets even though the Welsh region aren't guaranteed Heineken Cup rugby next season. [more] 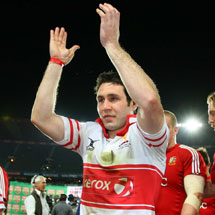 British & Irish Lions outside half Stephen Jones has pledged his future to the Scarlets even though the Welsh region aren’t guaranteed Heineken Cup rugby next season.

The Scarlets, knocked-out of the Amlin Challenge Cup by Toulon at the quarter-final stage last weekend, face a do-or-die Magners League clash with Cardiff Blues at Par y Scarlets this weekend as they fight not to finish as the fourth Welsh team in the league.

But Scarlets coach Nigel Davies couldn’t have asked for a bigger morale boost for his team that the announcement of the news today that British & Irish Lions outside half Jones has signed a two-year extension to his current deal with the club.

"I am delighted to have signed an extended contract. As I’ve said all along, I’ve always wanted to continue my regional career with the Scarlets,” said Jones.

"This region has plenty to build on for the future. We have a great group of talented young players who are coming through very strongly and will only grow in experience from all the game time that they have had this season.

"The philosophy and determination the Scarlets have in developing Welsh talent from within the region is something I firmly believe in – it’s good for the Scarlets and a positive move for Welsh rugby.

"It’s important to me to see this team develop further and I hope I can lend my experience to the team and support the younger squad members going forward. This squad is strong – there is a great team spirit, work ethic and energy amongst the younger guys and it will be good to keep this team together and build into next season.

“It’s definitely going in the right direction and while we may be facing some pressure at the moment, there is a lot to be positive about in the longer term. I’m just really looking forward to playing my part in helping accelerate the transition of this squad over the next two years."

Head Coach Nigel Davies said the move to secure the services of Jones was one that was hugely important to the future of the region.

"We are really pleased to have come to this agreement with Steve. He is a crucial part of our future, has been an integral part of this team for some time and as one of the most experienced Scarlets of all time, we know he has a lot to give both on and off the field at this stage in his career,” said Davies.

“He is a committed Scarlet, believes in our values and what we are trying to achieve and has a big influence on this squad going forward. With such a young squad, it is important that we retain key experience, knowledge and influence in our team from our senior players who not only perform on the pitch and set an example, but can help build the confidence and nurture the talent of our up and coming players.

“His motivation to stay with us is built on much more than just which competitions we are in and he’s a valuable member of our team here."