Prop could get another shot at Lions

A former All Black who helped New Zealand beat the Lions five years ago could be on his way to the destination of the Lions' next tour. [more] 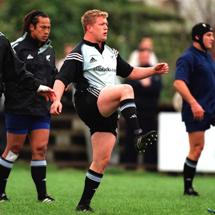 A former All Black who helped New Zealand beat the Lions five years ago could be on his way to the destination of the Lions’ next tour.

Gloucester prop Greg Somerville has been offered a contract with new Super 15 side Melbourne Rebels and is currently weighing up his options.

"I’ve talked to Melbourne but no decision has been made over whether I am going," Somerville told BBC Gloucestershire.

"My wife wants me to decide in the next few days but I’m struggling. This is one of the tough calls in life.

"I’ve had a really good experience here and settled in well with the boys, but back home there are the grandparents and that sort of thing for the kids.

"There are a lot of factors creeping in. I’ve had to start looking just to see what was around in order to make a decision so there’s a lot to iron out. "

Somerville featured in all three Tests when the All Blacks whitewashed the Lions in 2005, coming on as a replacement in the first international in Christchurch before starting both the second and third Tests in Wellington and Auckland.

He moved to England in December 2008 from Super Rugby giants the Crusaders but had considered returning home to New Zealand to challenge for a World Cup spot ahead of the 2011 tournament.

It is unclear whether a switch to the Rebels would prevent him from reigniting his All Black career but it could see him face the Lions once more.

Melbourne could well be on the Lions’ agenda for their 2013 tour of Australia and, at 32 years of age and with props often hitting their peak later than the average player, Somerville could well get a second chance to inflict pain on Britain and Ireland’s elite.