In the second of our Lions Legends series we profile Welsh centre Scott Gibbs, a three-times Lions tourist and one of the truly iconic faces from the 1997 series win over South Africa. [more] 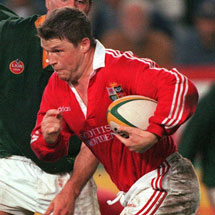 In the second of our Lions Legends series we profile Welsh centre Scott Gibbs, a three-times Lions tourist and one of the truly iconic faces from the 1997 series win over South Africa.

Ask any number of Lions supporters to recall their favourite moments from recent tours and no doubt Gibbs’ dump tackle on Andre Synman or his stunning run straight through giant Springbok prop Os du Rant will feature highly on many of those lists.

Gibbs’ complete professionalism, rock solid defence and unbounded enthusiasm saw him become an integral part of that 1997 triumph in what was just the second series win over South Africa in the 20th century.

Four years earlier, he was a surprise starter in both the second and third Tests on the tour of New Zealand when he ousted then England captain Will Carling from the starting XV.

Despite not making the original party for the 2001 tour to Australia, Gibbs put his initial disappointment behind him to become a positive influence on the rest of the squad when called up as a late replacement for the injured Mike Catt.

In total, Gibbs played 15 times for the Lions over 12 years, winning five Test caps in the process.
Scott Gibbs’ factfile

On growing up as a Lions fan

"I watched the 1989 Lions religiously but I can remember watching the 1980 Lions in South Africa. I remember getting up very earlier in the morning to watch the ’89 Lions series and I could see how much that meant to those guys.

"When you become exposed to Lions rugby or international rugby you always look back and look at the successes of the Lions tours in ’71 and ’74. Before that, my dad would articulate some from the 50s and 60s."

On living the dream

"In 1990/91, the year after watching the 1989 Lions tour, I was in that mêlée with some of those internationals who had represented them.

"I’d seen the likes of Ieuan Evans, Mike Hall, John Deveroux, Anthony Clement and Rob Jones and so on, so to be playing with them in the same Welsh team in the following couple of years was a privilege.

"Once I’d played for Wales, the next subject matter was the British & Irish Lions and by 1993 I was firmly fixed that the Lions is what it is all about."

"I’ve got massively fond memories of 1993 even though we didn’t win the Test series.

"It was initially strange to be away for nine weeks in New Zealand. Looking back now, it was probably even stranger as there was no real telecommunications through mobile phones and so forth so it was old school touring.

"I went on that tour as an underdog and ended up playing the second third Tests. That was a great highlight for me because I remember Ian McGeechan was delighted to give me the jersey because I’d earned it. I played hard, trained hard and I deserved to get there.

"That’s one thing I learned from being with the Lions is that you get picked on merit and that was great."

On the 1997 triumph in South Africa

"When that squad was announced in ’97, I think there was an element that this squad was different, this management was different, and all those elements came together to create one playing entity.

"There was never anyone who felt alienated in any way. That’s a true strength of a squad, that inward support from everybody. That was there in abundance in ’97 and that was why it was so successful on the field and off the field. We made a lot of friendships and there was never one clique.

"I’ve got my lists of Lions laws, and togetherness was on it. There was never any question of us against them. It was all 35 preparing to beat the Springboks. Everybody played their part in that and that’s why everyone can share in the delight that we won the series because it wasn’t done by just the team on the day."

On what the Lions means

"I think the Lions has meant more to the rugby fraternity because it brings people together and there’s a common goal.

"It galvanises and brings all the Home Unions together. It’s the best of the best."