Lions centre Riki Flutey has had his season brought to a premature end. [more] 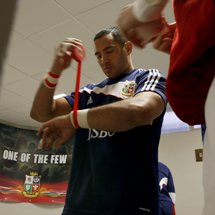 Lions centre Riki Flutey has had his season brought to a premature end.

The 2009 tourist is to undergo medical tests on his shoulder to discover whether he requires additional surgery.

Flutey, who impressed for the Lions in their third-Test win over the Springboks last July, had an original operation after returning from South Africa with Britain and Ireland’s elite.

Surgery has been unable to solve the issue completely, however, and the 30-year-old has featured in just five games for French side Brive this season.

Flutey only joined the big-spending Top 14 outfit during the summer but already appears set to leave France in the close season, with Lions-packed Munster being touted as a possible destination.

His latest setback could mean he will miss England’s summer tour of Australasia, including the two-Test series against the Wallabies on June 12 and 19.

Flutey was a notable absentee from England’s November internationals and also missed the Six Nations opener against Wales in early February.

He returned to play a part in the four remaining Six Nations ties but struggled to find the form that had led to a deserved Lions call up.