Riki Flutey has turned his back on extending his French sojourn and decided to return to London Wasps next season. [more] 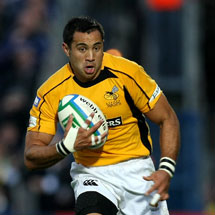 Riki Flutey has turned his back on extending his French sojourn and decided to return to London Wasps next season.

Injuries have largely ruined his time at Brive and the 2009 British & Irish Lions tourist will be hoping his shoulder problems are a thing of the past on his return to Adams Park.

Flutey’s new three-year deal will allow him to try to add to the 2008 Guinness Premiership title he claimed with Wasps. It was while at Wasps, who he joined from London Irish in 2007, that he won the first of hjis 13 England caps and was selected for the Lions tour to South Africa.

He only managed nine games for Brive and has been released by the French side in order to undergo further shoulder surgery to his acromioclavicular joint. The goal is to be fit in time to take a full part in Wasps’ pre-season campaign at the end of the summer.

“I’m delighted to be returning to London Wasps. I would like to thank Brive for the opportunity and experience, which I have enjoyed, but I am now fully focussed on getting my injury niggles behind me and getting back to my best level as a player,” said Flutey.

“I have every desire to play to the best of my ability for both club and country and I believe I can really do that in the Wasps environment.”

Wasps’ director of rugby, Tony Hanks, has described Flutey, who played in the third Test against the Springboks in 2009, as “a world class footballer”.

“His ability to play 10 or 12 at the highest level is proven by recent international form at 12 and as fly half when Wasps secured the Guinness Premiership title in 2008 – that versatility makes him a very special player,” said Hanks.

“He has achieved success with Wasps before and knows what we are about. Riki made a decision based on rugby and reflects confidence in the Club’s structure, environment and the values we stand for.

“His professionalism is something that has always impressed us and we are looking forward to the impact he will make both on and off the field within the squad.”