Three former Lions who are now among those men closest to Heineken and Amlin Challenge Cup rugby share the opinion that London Wasps will have to be at their very best to beat Cardiff Blues on Saturday night. [more] 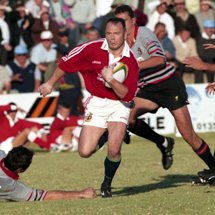 Three former Lions who are now among those men closest to Heineken and Amlin Challenge Cup rugby share the opinion that London Wasps will have to be at their very best to beat Cardiff Blues on Saturday night.

The English and Welsh capital clubs go head-to-head at Adams Park this weekend and Sky Sports pundits Ieuan Evans, Stuart Barnes and Dewi Morris believe the Blues have exactly the kind of game to trouble of one of the continent’s most successful sides.

Double Heineken Cup winners and 2003 Challenge Cup kings Wasps fell to a disappointing 35-19 league defeat to Bath last time out and all three men have noted similarities between the way Bath and the Blues approach the game.

“Their offloading made Wasps look silly. The Blues will offer a similar sort of game.

“The Blues don’t kick the ball a lot; they keep the ball in hand and why wouldn’t you when you’ve got such exciting talent with people like Casey Lualua and Jamie Roberts? They’ve got carrying and offloading ability.”

Five successive wins in all competitions have shown exactly what sort of rewards those abilities can bring when everything falls into place.

Dai Young’s Blues have scored 17 tries in their last four fixtures (all four of which have taken place away from home), including a staggering seven in the crushing 50-point win at Newcastle in the last round of the Amlin Challenge Cup.

And there’s no doubt that they head to Wycombe as one Britain’s in-form sides.

Having been seemingly out of contention for a top-four finish in their domestic league after eight defeats in their first 13 league games, the Blues could now qualify for a Play-Off spot thanks to series of impressive recent results.

It’s been a similar story in Europe, where their adventure seemed destined to come to a premature conclusion before a comfortable win over Sale Sharks was followed by a bonus-point triumph at Harlequins that saw them sneak into the Amlin quarter finals.

Perhaps unsurprisingly given their recent run of form, former England and Lions fly-half Barnes believes the attacking mindset of the Blues, especially their determination to keep the ball alive, will severely trouble Wasps.

“The old mantra in the Guinness Premiership was that ‘defences win titles’,” said Barnes, who toured New Zealand with the Lions 17 years ago.

“Well, they don’t unless you play the way the defences want. The Blues, when they’re at their best, don’t do that.

“The reason that Shaun Edwards says the Blues are favourites is (a) because he’s trying to take the heat off Wasps but (b) because there is a recognition of the fact that the Blues, at their best, play like Bath, and Bath made Wasps look silly at Twickenham.”

Those sentiments were echoed by Morris, Barnes’ former team-mate on that 1993 Lions tour, who feels the Blues’ combination of power and pace could lead to Wasps’ downfall.

“The Blues have also got a powerful pack of forwards with the likes of Xavier Rush and Gethin Jenkins,” added Morris.

“They will have a set piece that functions and if those boys behind get the ball, watch out.”