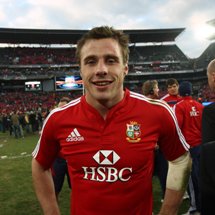 Lions star Tommy Bowe has capped a fine season with another well-deserved award.

The Ospreys wing was named IRUPA Player of the Year by his fellow Irish players last night, a year after being selected in his first Lions tour squad.

Bowe has been in superb form this season, cementing his reputation as one of the leading wingers in world rugby and it was no surprise to see him pick up the award for the second time in three seasons.

Having returned from the 2009 Lions tour as one of Britain and Ireland’s most consistent performers, the 26-year-old has gone on to enhance his standing with a series of outstanding displays for club and country.

Bowe featured in all three Tests for the Lions against the Springboks last summer, playing on the wing in the first two before switching to outside centre for the third-Test win in Johannesburg.

The former Ulster flyer has been a regular in the Ospreys’ Magners League campaign, missing only four of their 18 fixtures to date, as the Welsh region made it through to this weekend’s inaugural Play-Offs.

An impressive record of a try every other game this term has taken his overall Magners League tally to 38, ensuring he remains the leading try scorer in Celtic League history.

But Bowe isn’t content to revel in his own personal accolades. He wants team success in the form of Magners League glory.

"I’m absolutely thrilled," said Bowe, who will face plenty of Ireland and Lions colleagues if the Ospreys beat Glasgow to reach the Grand Final as their opponents will be either Leinster or Munster.

"It’s great to be recognised by the other players, especially when you’re playing overseas.

"We want to end the season on a high – we want to win the Grand Final – and if the fans are behind us for this we can do it, but Glasgow are a really good side.

"We are well aware of their record and the great results they’ve had recently, like the hammering they gave Leinster a couple of weeks back and their bonus point at the Scarlets.

"We’re at home which will give us an advantage. We just need to make sure that we use that advantage.

"It’ll make a huge difference if we can run out to a big, loud, passionate crowd. Make no mistake, the supporters will have a massive part to play."

Fellow Lion Jamie Heaslip was another winner on the night, picking up the Supporters’ Player of the Year.