Former Lions tourist Ben Kay is about to end his long association with Leicester Tigers. [more] 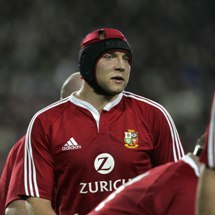 Former Lions tourist Ben Kay is about to end his long association with Leicester Tigers.

The World Cup winning second row has been with the Welford Road outfit since 1999 but will leave the club this summer.

Kay, who won Test honours with Sir Clive Woodward’s Lions in 2005, has made more than 280 appearances for the Tigers, winning English league, Anglo-Welsh Cup and Heineken Cup titles with the East Midlands giants.

But the 34-year-old has found first-team opportunities limited this term and hasn’t been offered a new contract by former team-mate and now Leicester head coach Richard Cockerill.

"I’ve had 11 fantastic years at Leicester Tigers and this has been a very important part of my life,” said Kay, who won 62 England caps during his time with the Tigers having joined the club from Waterloo.

"I’ve played alongside some legends of the game with Leicester and I have some great memories of my time with the club. Welford Road, in particular, has been very good to me and I’ve enjoyed so many great occasions at the stadium over the years.

"I’d especially like to say thanks to all of the fans for their great support over the years.

"Now I have reached a point in my life where I have to consider what happens next. I have a number of options to consider for the future. I will make a decision on my immediate
future during the summer."

Kay has been one of Leicester’s most-consistent performers in recent years, with the club reaching five successive Guinness Premiership Finals since his famous second row partner Martin Johnson retired in 2005.

And despite deciding that the Tigers can do without Kay next season due to presence of the likes of Louis Deacon, Geoff Parling, Richard Blaze and Tom Croft at the club, Cockerill is full of praise for what he has achieved.

"Ben has been a brilliant servant of the club for over a decade and a genuine world-class operator with the club, with England and the Lions,” added Cockerill.

"He has shown true commitment to Leicester Tigers since he arrived in 1999. His individual skills, his leadership and his work for the team have taken him right to the top of the game and kept him there for a long period of time.

"I know Ben has several options open to him for the future, and we wish him well in whatever he does. Ben and his family will always be welcome at Welford Road."