One of the stars of the Lions' 1997 series triumph in South Africa believes his current Welsh charges can beat the Springboks this summer, even if the stats are stacked heavily against them. [more] 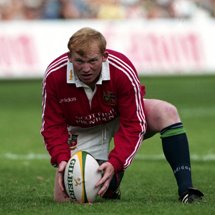 One of the stars of the Lions’ 1997 series triumph in South Africa believes his current Welsh charges can beat the Springboks this summer, even if the stats are stacked heavily against them.

Neil Jenkins kicked Britain and Ireland’s elite to glory 13 years ago, scoring 15 points in both the first and second Test victories in Cape Town and Durban.

Jenkins earned legendary Lions status thanks to his metronomic displays on that historic tour but he only tasted victory over the Boks with Wales on one occasion in his lengthy career.

That sole success came in 1999, when South Africa arrived in Cardiff for the first-ever game at the new Millennium Stadium.

Jenkins was an influential part of a Graham Henry coached side that ran out 29-19 winners that day and the man now working as national skills coach is hopeful that Ryan Jones and co can match that achievement in just under three weeks time.

"We know they are beatable, but Wales have only managed it once in over 100 years so the stats say it all," said Jenkins.

"Just like South Africa in ’99 we will be itching for victory but we have a huge task ahead of us.

"Wales are still playing that high-risk, high-reward brand of rugby and we are going into the three Tests, against the Springboks at the Millennium Stadium, and the two games on tour in New Zealand in June, very much up for the challenge.

"From a personal point of view I’ve been on the winning side against the Springboks just once for Wales and twice for the Lions.

"We knew we’d never beaten South Africa, but we were also full of confidence at the time. The Springboks had just put 100 points on Italy, but we were ready for them and the all new ‘Millennium Stadium’ factor came into play – which is exactly what we need to happen next month.”

Just as he had done with the Lions in 1997, Jenkins effectively proved to be the difference between two evenly-matched teams when Wales beat the Boks two years later.

The former world-record points scorer claimed a personal tally of 19 that day as Wales achieved something they have failed to repeat in the 11 years that have followed.

"Against the Springboks the fans can help us like they did in ’99. The stadium was only at part capacity then with only 27,000 fans allowed in because it was basically still under construction, but the atmosphere suggested there were many more Welshmen in there and we knew the whole nation was watching in one way or another,” added Jenkins.

"We were playing them on the back of a really good Six Nations campaign for us, were we beat England and also France in Paris so our confidence was high.

"We’d sent a squad over to South Africa in the previous summer which had taken a 96-13 beating in Pretoria, but that side was without several senior players. That loss had hurt us but we met them again at Wembley that Autumn and put in a much better show posting a three-point lead with just minutes to go before finally surrendering to a 28-20 loss.

"But this match was to be part of a 10-match winning run for Wales under Graham Henry – it was our 6th win in a row.

"I remember making a nervy start and missing a simple kick early on, but we scored two tries in the first half and I think I had a hand in both of them and we went in at the break with a 19-6 lead.

"We knew the second half would be tough and as much was said in the dressing room. South Africa never wanted to lose to Wales, we’d managed one draw in 12 attempts at the time and there were 40 minutes ahead of us in which we could make history.

”This was a huge game, like those against England. Facing the Springboks you just have to be up for it – this was one of those ‘one off’ matches."