Lion looks back on golden opportunity

Mervyn Davies is hoping Wales can record their second win over the Springboks when the two sides meet next month, but the legendary Lion believes his countryman should already have achieved that feat. [more] 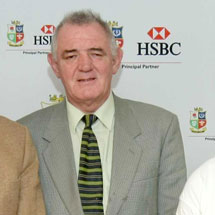 Mervyn Davies is hoping Wales can record their second win over the Springboks when the two sides meet next month, but the legendary Lion believes his countryman should already have achieved that feat.

Wales face South Africa for the 24th time on June 5 having only won once in the 100-year history of the fixture yet double Lions tourist Davies believes they should be going for a hat-trick.

Arguably the greatest No8 of all time, Davies was a key member of an outstanding Welsh team in the late 1960s and ‘70s – a team that came oh so close to beating the Boks 40 years ago

Wales’ only win to date came in June 1999, in the Millennium Stadium’s inaugural match, but there has been another significant clash, on 24 January, 1970, which Davies and fellow Lion Gareth Edwards have good reason to remember well.
Edwards, who led the side out as Wales’ youngest captain, scored a try deep into injury time which remains one of the most iconic moments of a golden era for the Welsh game.

The try tied the game at 6-6, but the man widely recognised as the game’s best-ever player proved he was fallible by missing the conversion that would have sealed an historic victory in horrific conditions.

Davies, who was a fresh face in the Wales side at that time but went on to play in seven Lions Tests on the historic 1971 and 1974 tours of New Zealand and South Africa, maintains they should have come away with a victory.

"It was a day that I will never forget, for a host of different reasons," said Davies.

"Yes, we should have won and yes, we had chances to do so. However, it was not to be and all of us who took part have to accept that it was an opportunity missed, but an experience that we will always remember.

"I couldn’t tell you the Wales line up, I still can’t believe the weather conditions and I find it hard to explain just how I felt to wear the red of Wales against three of my real rugby heroes.

"For me, it was the realisation of a dream. I had spent the previous few years in awe of the Springbok back row of Greyling, Bedford and Ellis and here I was, playing for my country and up against that trio."

The match came to life in the second half with a try, against the run of play, by South African left wing Syd Nomis. The two sides traded penalties, but refusing to give up and trailing by only three points to South Africa’s unconverted try and penalty, Wales responded by spreading the ball wide.

Deep into injury time, 1977 Lions skipper Phil Bennett, playing out of position on the right wing, fed 1971 Lions star Barry John who kicked high and wide to centre Ian Hall. Having secured the ball, Hall set up a ruck 10 metres from the South African line after which Edwards, spotting that Nomis was embroiled in the ruck and unable to defend the far side of the field, darted along the blindside to quite literally splat down for the score that brought the sides level.

The match very nearly became Wales’s first victory over South Africa, but despite stepping up with confidence in a bid to land the conversion, Edwards left his kick short and wide, forcing Wales to wait another 29 years before breaking their duck.