A 2009 Lions tourist has strongly suggested that he intends to switch to Rugby League. [more] 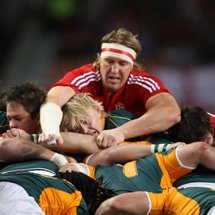 A 2009 Lions tourist has strongly suggested that he intends to switch to Rugby League.

Wales No8 Andy Powell says he would love to join fellow Welsh Lion Gareth Thomas in the 13-man code sooner rather than later.

Powell’s ball carrying prowess and overall strength and power could be ideal for League and the 28-year-old believes his skills would certainly be transferable.

"I would love to go and play league," Powell told The Guardian.

"I really would. It would suit my game. League is about getting the ball in hand and it’s a straight-on game that matches my style.

"As a kid I always followed league and I also played it – around U14 level. I’ve been up a few times to watch Alfie (Thomas) play and he’s really enjoying himself.

Powell was recalled to the Wales squad earlier this week, three months after his humiliating public dismissal following a breach of discipline that saw him charged with drink driving following the Six Nations win over Scotland.

The Cardiff Blues star was dropped for the remainder of Wales’ Championship campaign, banned from driving for 15 months and widely criticised for his actions.

But while weaker characters may have wilted in the face of such criticism, Powell has quietly got on with things back at club level, although he admits recent times have been far from easy.
"It’s been really tough. Far harder than I ever thought,” added Powell.

"The last few months have been quite low and having an injury hasn’t helped. I’ve been in a downward spiral I’m only just escaping. I once gave up rugby for a year when I doubted myself. But this time has been different.

"I’m having to ring friends to ask for a lift here, there and everywhere. It’s putting other people out and I don’t like that. I’ve got good friends around me but I really regret what I did.

"Wales needed to make an example of me to put an end to all these silly stunts. I’ve done the crime and now I’m doing the time. But Gatland has been great, he has got brilliant man-management skills.

"Mum was gutted really. After a good two years for me she wanted to get out the old wooden spoon and give me a good slap on the arse. She was supportive but she gave me a good bollocking as well. I think she’s quietly forgiven me now."