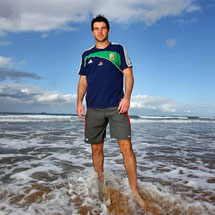 Phillips was one of 13 Welshmen who toured South Africa last summer as the Lions went mightily close to winning a nail-biting series against the Boks.

Warren Gatland’s men have the chance to avenge that 2-1 series defeat when South Africa arrive at the Millennium Stadium on June 5 and Phillips believes the Lions’ third-Test win in Johannesburg and the close nature of the three-match series can work in Wales’ favour.

"The last time many of us played South Africa we came away with a win,” said Phillips, who joins eight Test Lions from 2009, including five who played in the 28-9 victory in the final rubber, in Gatland’s 27-man summer squad.

“And we know in the second Test with the Lions we probably should have won as well, but, in all fairness, the Springboks won the series and there is no doubting they will be an incredibly tough prospect.”

Wales have beaten South Africa just once in their history – a 29-19 triumph in the inaugural match at the Millennium Stadium – but Phillips is convinced there is enough talent in the Welsh set up to beat the best sides in the world.

Phillips and co travel to New Zealand straight after facing the Boks and the inspirational scrum-half says confidence will be the key to potential success.

"We were very disappointed in South Africa and it’s great to get the opportunity to play them again, but we deserve to go into the game with some real confidence,” added Phillips.

"It’s not about arrogance, but about belief in ourselves as players. In Wales we are very good at building opposition teams up, but we have not been so good in the past at backing ourselves.

"But we have a core of players here who have been playing well and improving for two or three years – or even four or five – and we know we have the ability so why shouldn’t we be confident?

"As Warren says, we have to believe we can win, even if we just change our national character a bit for those 80 minutes and turn it on then, that will be enough, but the belief must be and will be there."