The tightest of tussles

You couldn't have asked for a tighter finish to a more enthralling series. [more] 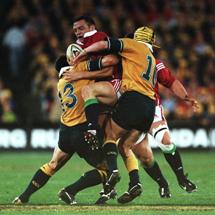 You couldn’t have asked for a tighter finish to a more enthralling series.

A better ending? Of course – a win of any sorts would have done the trick. But when it comes to tension, excitement and pure drama, the third Test between the Lions and the Wallabies in 2001 takes some beating.

The tour as a whole was a troubled one, with talk of overtraining and of discontent within the camp, but the quality of the rugby was something special.

The Test series against the World Champions lived up to expectations and both sides gave their all and a little bit more.

When it came to the third and final rubber, everything was up in the air. When the final whistle blew to signal the end of another adventure, the Lions were left heads beaten and bowed.

Having won the first Test but lost the second on the 2001 tour of Australia, the Lions went into the third rubber knowing the success of the entire trip would come down to just 80 minutes of rugby.

After being so superior in the first encounter in Brisbane at the end of June, the Lions now went into the final Test in Sydney as slight underdogs having been beaten 35-14 in Melbourne a week earlier.

Both teams remained confident that it would be they who would prevail, while personal animosity between Lions utility back Austin Healy and Wallabies lock Justin Harrison simply added even greater spice to a game that needed no extra hype.

What followed was some of the most enthralling rugby ever seen, with the contest, and the series, remaining in the balance right until the very end.

The Lions line up knowing the series is on the line

Both sides were hit by injuries to key personnel ahead of the third Test, with the Wallabies losing first-choice fly-half Stephen Larkham and the Lions forced to do without star blindside Richard Hill and instrumental scrum-half Rob Howley.

Australia head coach Rod Macqueen brought in Elton Flatley to play alongside the impressive George Gregan at half back, while uncapped ACT Brumbie Harrison replaced David Giffin in the second row.

Fresh from controversial newspaper comments and an apology to the entire squad, Matt Dawson, one of the heroes of the 1997 Lions tour of South Africa, took over from Howley, with Martin Corry starting in the back row.

Apart from the two enforced changes, Lions boss Graham Henry kept faith with the side heavily beaten in Melbourne, although he did make alterations to his replacements bench.

The versatile Healy had originally been expected to take a place on the right wing but his personal duo with Harrison never materialised as the Leicester Lip missed out through injury.

His misfortune led to the biggest surprise of the series, with the Lions needing to call up scrum-half cover from outside the touring party.

Former Scotland No9 Andy Nicol had been out in Australia leading a fans’ tour party but was suddenly called into action as he was asked to answer a unique Lions SOS that required him to go from holiday maker to Test squad member in just two days.

Ronan O’Gara was also brought into the Test 22, although, like Nicol and Martyn Williams, the Irishman would remain an unused replacement.

The Lions had already been hit hard by injuries prior to the start of the Test series, with Dan Luger, Lawrence Dallaglio, Mike Catt, Phil Greening and Simon Taylor all prevented from challenging for a Test spot and Will Greenwood being ruled out in the lead up to the final rubber.

Consistency in selection therefore seemed to be the byword for Henry when it came to his starting side, with his first XV for the third Test showing just one change from the team that began the opening match of the series.

It was a different story for the Wallabies, however, with Macqueen changing five members of his starting line up between the first and final Tests.

Henry named nine Englishmen in his run-on side – four in the backs and five in the pack.

It was the Wallabies who celebrated victory after an amazing series

Matt Burke’s ever-reliable right boot had given the hosts an early 9-3 lead in Stadium Australia but a second Jason Robinson try of the series reignited Lions’ hopes that this would be their day.

The Lions’ scrum provided the initial platform before Dawson, Wood and Smith combined to send Robinson flying over in the left-hand corner.

Jonny Wilkinson’s magnificent touchline conversion gave the Lions the narrowest of leads with just over a quarter of the game played but the young Englishman’s boot was to fail him on three vital occasions.

The Lions had hoped to take a lead of some sorts into half-time but a late Daniel Herbert try stopped that from happening.

Wings Andrew Walker and Joe Roff combined to send the centre over close to the posts; Burke converted and the Wallabies took a psychological edge and a 16-13 advantage into the break.

But if the first period hadn’t ended in quite the way the Lions would have liked, the second 40 minutes certainly started in a far brighter fashion.

Great work from an industrious Lions pack created the space for Wilkinson to wriggle over shortly after the restart. England’s future World Cup winning hero converted to move the Lions four points clear with three minutes of the second half played and suddenly the toursists were back on the front foot and the series was swinging their way.

Jonny Wilkinson scored for the Lions early in the second half

But the feeling didn’t last. Charvis, a half-time replacement for the injured Quinnell, attempted to run the ball out of his own half before getting into all sorts of trouble. The Welsh forward then made the situation even worse by hoisting a loose clearance straight into the arms of the opposition.

The Wallabies took full advantage, running the ball back into the danger zone, with Toutai Kefu and Nathan Grey making the hard yards for Herbert to claim his second score.

Trailing 23-20, the Lions hit back through a Wilkinson penalty after Herbert had been yellow carded for a high tackle. But, crucially, the Lions failed to make the most of their one-man advantage and were unable to add to their tally in the 10 minutes Australia’s double try scorer spent warming the bench.

It should have been the time for the Lions to surge ahead, to knock the stuffing out of the Wallabies and strike a decisive blow for series victory. Instead, Australia escaped unscathed and with their confidence heightened from their ability to keep the Lions at bay while down to 14 men.

And while the Lions would remain stuck on 23 points for the rest of the match and therefore the series, the Wallabies pushed on. Two more penalties from Burke, his fourth and fifth in total, sealed the deal and left Henry’s tourists wondering what might have been.

At the heart of those ‘what ifs’ would be a late lineout that will be forever etched in Lions folklore, but for all the wrong reasons.

With time running out, the Lions had one more chance to secure the series. Wilkinson’s penalty kick to touch gave the Lions a lineout just five metres short of the line and the perfect chance to drive over for their third try.

The world held it’s breath as the series approached its pivotal moment. But when those fans who had closed their eyes in nervous anticipation opened them once more, they were met by a far from pretty sight. Harrison wrote himself into the history books by nicking the ball from in front of Johnson and the series was all but gone.

A few more nervy moments followed for the Wallabies but, when the hooter sounded and Walker hacked the ball into touch, it was they and not the Lions who could call themselves history makers after registering their first-ever series win over Britain and Ireland’s elite.

"Congratulations to Australia, they were more consistent under pressure. We didn't do too well at the lineout and the tackle.

"The players have shown a lot of guts and character and I am proud of what they have achieved.

"The build up was actually more frustrating than the match itself. We had so many injured players that we probably only had about two thirds of the side on the training pitch at any one time and not even the same 10 players. When you consider it was impossible and impractical to undertake any full sessions in preparation, what they did in that Test was really quite remarkable.

"It’s been great to work with some marvellous professional players, coaches and management, but the ultimate objective is to win. That’s the way it is these days, and that didn’t happen, so that’s disappointing. We did everything we could to win the series, but the line is that we lost."

"My greatest memories of this team will be the composure we showed under pressure. When we've had a problem we've been able to overcome it.

"We played the game smart which is something we talk about at the Wallabies.

"What a bloody good way to go. I bow out a happy man, having seen Australia so resilient under extreme conditions."

"We've got no excuses, Australia deserved to win it. I told the team that this should be our 80 minutes. We came up short and it hurts.

"It was a tremendous series, three great games of rugby and it came down to the last game.
"Australia were cute in the lineout and that was the difference between the two sides.

"I'm sorry we didn't win but the players can be proud of themselves. We were running on empty. Half the side was held together by sticky tape."

"The whole series just turned on a few things.

"I felt we had a bit more control throughout the match, though the statistics might not back this up, and I thought we had the balance in terms of territory and defence."

Rod Macqueen and John Eales were all smiles in Sydney

"The third Test will linger long in my memory because of the enormity of the occasion, but also because we were so near to pulling off an incredible Test series, only to lose.

"It’s been a fantastic experience for me, but whenever I look back on it all, the final feeling will be one of disappointment and regret because, ultimately, we lost. That’s the thing about rugby, when it’s gone, it’s gone."

"The result was never clear cut. As the final whistle blew, the Lions had a chance to win. Had a pass gone in front of the man rather than behind him the result could have been different. That’s how close it was. After three games of rugby, it came down to the final pass to decide the winner."

The Lions in Sydney: