One of the Kiwis who crushed the Lions has now conquered Europe. [more] 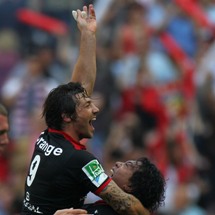 One of the Kiwis who crushed the Lions has now conquered Europe.

Kelleher was understandably delighted after Toulouse downed Biarritz 21-19 in Paris, particularly as he believes the Heineken Cup hasn’t got any easier since he first moved to France just under three years ago.

“Year after year, this competition gets tougher,” Kelleher, who played the full 80 minutes at the Stade de France having started the second and third Tests for the All Blacks against the 2005 Lions, told Sky Sports.

“We’re just ecstatic to come out as European Champions because it really is a challenge.

“It’s been a long old season but a satisfactory one today!”

Toulouse dominated the majority of Saturday’s hard-fought final, with their formidable pack in superb form, especially at scrum time.

But the now four times Heineken Cup winners nearly threw the match away when Biarritz centre Karmichael Hunt crossed for the only try of the game with just minutes remaining.

Kelleher admitted that the finale was far closer than he would have liked, although he was keen to pay tribute to his outstanding set of forwards.

“We’ve got an awesome pack and it’s great to play behind them,” added Kelleher.

“Yannick Bru looked at their scrum and we thought we could get on top of them in that area. We used our scrum as a real weapon. We put them in their half and played some sensible rugby and got penalties from those efforts.

“But we came through in the end; we took our opportunities and it paid off.”

Kelleher became the ninth New Zealander to pick up a Heineken Cup winners medal, leaving Biarritz captain Jerome Thion with the heartbreak of a third European Cup Final defeat in the process.

The ex-Highlanders and Chiefs star remains one of the most-high profile signings in the history of European rugby and today’s result ensures both the player and his club will view his move across the hemispheres as an over-riding success.

“This will take some time to sink in. It has made all the hard work well worthwhile,” explained Kelleher.

“It is just fantastic to win the Heineken Cup – it was one of the goals I set myself when I left New Zealand and now I’ve done it.

“It has been five years since Toulouse last won it so this is a new team that has really come together. We knew it was time we started winning some championship titles.

“We’ve got a great squad and that enables us to rotate our players and keep us on a greater winning level.