The Barbarians have selected three Lions for their clash with England on Sunday. [more] 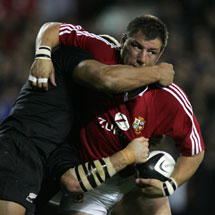 The Barbarians have selected three Lions for their clash with England on Sunday.

Julian White, Ben Kay and Martyn Williams will turn out for the famous invitational XV when they take the field at Twickenham for an end-of-season showpiece.

Leicester duo White and Kay will have the chance to impress against their own country, with both players having been part of England’s World Cup winning campaign in 2003.

The pair are joined by another Englishman in the starting line up, with Wasps and soon to be Toloun wing Paul Sackey also included.

Williams, who has featured in each of the last three Lions tours, starts in the back row against Cardiff Blues club-mate Xavier Rush and New Zealander Rodney So'oialo, who tasted success against the Lions with the All Blacks back in 2005.

George Smith, who faced the Lions with Australia eight years ago, is named among the replacements bench that also features Biarritz skipper Jerome Thion just a week after his Heineken Cup heartbreak.