Mike Blair will lead a Scottish XV against Japan Select at Murrayfield on Tuesday night in a game that will prepare the Scots for their summer tour to Argentina. [more] 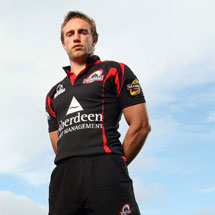 Mike Blair will lead a Scottish XV against Japan Select at Murrayfield on Tuesday night in a game that will prepare the Scots for their summer tour to Argentina.

Head coach Andy Robinson has made seven changes from the team that started the RBS 6 Nations win over Ireland in Dublin in March. The match kicks-off at 7pm at Murrayfield and admission is FREE with gates opening at 5pm.

In the starting pack are Glasgow Warriors trio Moray Low (prop), Richie Gray (lock) and Richie Vernon (flanker). Vernon is the only member of the Scotland A party who will set out on the defence of the IRB Nations Cup in Bucharest next month, to start tomorrow, albeit two of his Scotland A colleagues, Fergus Thomson and Mark McMillan, are on the bench.

”We're looking at the players who are going to be available on the tour and we want to see them in action tomorrow. After their run to the Magners League play-offs we're giving some of the Glasgow Warriors players some extra recovery time,” said Robinson.

”Tomorrow's match is about getting our systems in place and how we are going to approach key elements. It's much better to do that in a live match than simply seeking to replicate it in training.”

Grove, 22, who won three caps during last year's Autumn Tests, explained the reasoning behind his loan move to Edinburgh. "The move is to give me the best chance to continue my international career and it's a great opportunity to play with the quality backs in the Edinburgh team.

"Edinburgh play a high-tempo game and I'd like to think that plays to my strengths," he noted.

Japanese rugby is on a high with their senior team having qualified this month for the Rugby World Cup 2011 and there will be interest in the depth of their extended squad.