The Springboks will arrive in Wales this week for the Principality Building Society Summer Test at the Millennium Stadium on Saturday with a clean bill of health following last weekend's Super 14 final between the Bulls and Stormers. [more] 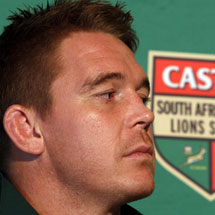 The Springboks will arrive in Wales this week for the Principality Building Society Summer Test at the Millennium Stadium on Saturday with a clean bill of health following last weekend’s Super 14 final between the Bulls and Stormers.

There were a few minor scares after the o their title with Stormers lock Andries Bekker (foot) and centre Juan de Jongh (bruised thigh) undergoing scans on Sunday morning. However, the South African medical team is optimistic that they will be ready to play on Saturday.

No fewer than eight players who featured in the all-South African Super 14 final will be on parade at the Millennium Stadium – Danie Rossouw and Dewald Potgeiter from the Bulls and Gio Aplin, Jacque Fourie, Juan de Jongh, Ricky Januarie, Francois Louw and Andries Bekker from the Stormers – and there will be 10 players who featured in the winning test series against the 2009 British & Irish Lions

Three of the five overseas-based players in the squad – Frans Steyn, Butch James and BJ Botha – assembled in Johannesburg whilst CJ van der Linde and Joe van Niekerk will join up with the squad on arrival in the UK.

“All the players are ready to tour. We have a short and intense week but it’s a challenge we are looking forward to. Some of the management team is already in Wales to make sure that everything is in place for us to hit the ground running when we arrive,” said Springbok coach Peter de Villiers.

The game will reunite scrum half Ricky Januarie with his former Ospreys team mates a week after they clinched the Magners League Grand Final title in Dublin. Leinster prop CJ van der Linde was on the losing side on Saturday and could well come face-to-face with Ospreys prop Adam Jones for a second successive weekend.

Toulon skipper Joe van Niekerk will also find himself opposing a number of the Cardiff blues players who denied him the chance to lift the Amlin Challenge Cup in Marseille.

The two caps in the starting XV – wing Gio Aplon and flank Francois Louw – were excited at the prospect of making their Test debuts at the Millennium Stadium.

“It’s a dream come true and I am looking forward to it. This is a new challenge altogether and it will be a big moment in my career,” said Aplon.

Louw described his selection as “amazing”. “It’s fantastic. It is great to be included and I am ready for the hard work that is ahead this week”.