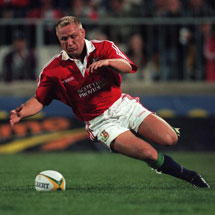 The 2005 British & Irish Lions hooker has spent the past three years playing in the Top 14 with Brive, but has now agreed to return home to England and has signed a two year contract with Leeds Carnegie.

The 31-year-old Thompson played for England against the Barbarians at Twickenham Stadium at the weekend and will tour with them in Australia and New Zealand this summer.

“It was a big decision for me to come back to the Guinness Premiership but I am looking for a fresh challenge in my career and Leeds Carnegie is exactly right for me,” said Thompson.

“I’ve been picking the brains of England team mate Hendre Fourie about how the club operates and talking about the guys. I’ve been watching some videos and I just want to make sure I am up to speed when I report for pre-season training.”

Thompson spent 10 seasons at Northampton saints before heading to Brive in 2007 to pursue a coaching career after suffering a neck injury. But he received further medical advice and was able to resume playing at the highest level and now has 55 caps.

”Steve is a world class player who is still performing at the top of his game and he sees the move to Leeds Carnegie as a chance to improve even further,” said Back.

”We are building a strong pack here at Leeds and Steve will be a great addition to that. We already have Andy Titterrell and Phil Nilsen at the club and the competition for the hooking spot highlights the strength in depth we are now building.”