Loss of Lion can open doors for others

Lions coach Shaun Edwards believes the loss of a Lions star for Wales summer schedule will open the door for other players to impress. [more] 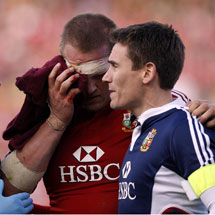 Lions coach Shaun Edwards believes the loss of a Lions star for Wales summer schedule will open the door for other players to impress.

Loosehead prop Gethin Jenkins was ruled out of the summer clashes with South Africa and New Zealand – the two sides who beat the Lions in Jenkins’ two Lions tours to date.

And, having been described by his defence coach with both Wales and the Lions as the best loosehead in world rugby, Jenkins’ absence will clearly be felt by the Welsh, although Edwards believes the likes of John Yapp, Paul James and Craig Mitchell will now step up to the mark.

"Everyone is pretty aware of what happened to Gethin at the weekend and he will miss the tour,” said Edwards after it was announced that the calf injury that saw Jenkins limp out of Cardiff Blues’ Amlin Challenge Cup win over Toulon would keep him out of action for up to a month-and-a-half.

"He has had a long-standing problem and is likely to be out for four to six weeks which puts him out of contention for the whole summer.

"Any team losing the likes of Gethin is going to be a negative thing.

"We are losing a British & Irish Lions front-row player, someone with a lot of experience and we all know his capabilities in the loose.

"It's also disappointing for Gethin but I am a big believer of one door shutting for one person is one door opening for another.

"John Yapp played well for the Blues the other day and there are other players who have been fighting for that position not only last autumn but also in the Six Nations."

Jenkins, who has already featured in five Tests for Britain and Ireland’s elite, is among six Welsh players to be unavailable for this month's tour to New Zealand.

Fellow Lions and Wales front-rower Matthew Rees, who packed down alongside Jenkins in South Africa last summer followed Edwards in admitting that the athletic prop would be missed.

"The news is definitely a big blow for us as Gethin has been the best loose-head in the world over the last couple of years,” added Rees.