Lions coach Warren Gatland made his disappointment known after his Wales side slipped to defeat against South Africa but then immediately turned his attentions to the forthcoming tour of New Zealand. [more] 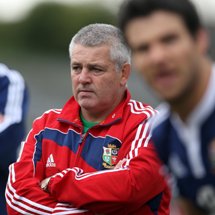 Lions coach Warren Gatland made his disappointment known after his Wales side slipped to defeat against South Africa but then immediately turned his attentions to the forthcoming tour of New Zealand.

Wales were beaten 34-31 by the World Champions in a thrilling summer Test but they now have an almost immediate chance to put that frustration behind them in the Land of the Long White Cloud.

Gatland’s men head Down Under this week for a two-Test series with the All Blacks and the 2009 Lions forward coach has no doubt that good things are just around the corner for his adopted country.

“We will be hard on ourselves about this result but we still have to be excited about playing the All Blacks,” said Gatland, who was part of Sir Ian McGeechan’s coaching team 12 months ago.

“South Africa brought real physicality but the pleasing thing was that we matched it. The breakdown was a concern but Bradley Davies, Saw Warburton, Jonathan Thomas and Matthew Rees carried well.

“We’re knocking on the door and it’s going to crack for us soon. The thing about this game is that you sense you are not too far away.”

Gatland has made it clear that the best way for Wales to improve is to face the very best the world has to offer as often as possible.

Running the Springboks close was clearly a start and facing the All Blacks on foreign soil will surely be the ultimate test just over a year out from the 2011 World Cup.

Wales have never tasted victory over the Kiwis in New Zealand but Gatland knows that just one big win over one of the southern hemisphere giants would be a massive step forward and one that Wales could really build on.

“I keep saying that the only way to learn is by playing against best players and teams,” added Gatland.

“We know that if we play to our potential and are a bit more accurate, we have a good chance of winning.

“We are growing as a team and sometimes it’s just a case of getting that win because it will transform the team in terms of self belief and confidence.

“That’s what we desperately need at the moment. We had an opportunity to get it here and that’s the real disappointment.”

Wales will travel to New Zealand without star centre James Hook, who was again at the forefront of his side’s challenge against the Boks.

Hook crossed for the game’s opening try and was a constant form in the opposition’s side with his clever running and impressive range of passing.

The Lions tourist requires an operation on a shoulder injury – one that he postponed so he could face the Boks – and, while Gatland is naturally disappointed not to have the 24-year-old at his disposal in New Zealand, he has been more than happy with how Hook has progressed since his switch to centre.

“Everyone saw with a few touches how talented and special James is as a player,” was Gatland’s assessment as Hook again received plenty of plaudits.

“It was great to have him out there but he needs to get the shoulder fixed so he can play in the autumn internationals.”