One of Australia's most-precocious talents will face England on Saturday, three years before he is expected to challenge the Lions on what should be a mouth-watering tour. [more] 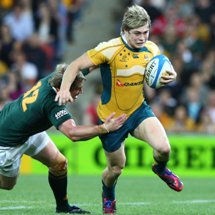 One of Australia’s most-precocious talents will face England on Saturday, three years before he is expected to challenge the Lions on what should be a mouth-watering tour.

James O’Connor is being tipped to be world-class by the time the Lions arrive Down Under in 2013, with the 19-year-old full back already having shown that he has the potential to become an Australian great.

O’Connor has been named in the No15 shirt for the first Test against an English side led by Lions flanker Lewis Moody in Perth this weekend after a breathtaking mid-week display for the Australian Barbarians.

The Western Force star scored a sublime hat-trick in the 28-28 draw with England’s second team on Tuesday night as he reminded Wallaby coach Robbie Deans just how talented he really is.

And Deans has clearly sat up and taken notice after he named the youngster ahead of Kurtly Beale for the clash with Martin Johnson’s men at the Subiaco Oval.

"The quality shown by James was simply impossible to ignore," said Deans, who substituted the man-of-the-match after just 47 minutes of Tuesday’s draw.

"We indicated prior to the game in Canberra against Fiji that part of the motivation for giving Kurtley that game was the fact that had a court case coming up on the Monday that was going to impact his ability to prepare effectively for the Tuesday fixture.

"We felt it was best to give Kurtley his opportunity in that instance because of his peculiar circumstance. He obviously did really well with that time and showed that he's perfectly able to play at this level, but James is the incumbent and responded to Kurtley's performance really well and has earned the right."

If recalling O’Connor has been met with great excitement by the Australian public, the situation in the front row has been greeted with far more trepidation.

Scrummaging had been a perceived weakness for the Wallabies until recently but, after all their hard work in re-establishing their reputation as a powerful set piece unit, critics suggest they are in danger of going back to square one this weekend.

Deans may be confident that he is beginning to develop the kind of strength in depth needed to make a serious bid for the 2011 World Cup and to topple the Lions two years later but he would surely rather not have had to select a front row that have only have two caps and one Test start between them for this Saturday’s Test.

Ben Daley, the 21-year-old son of the former Australian rugby league international Phil Daley, makes his debut at loosehead, while hooker Saia Faingaa and tighthead Salesi Ma'afu only made their own Test bows five days ago.

"I've got no doubt that when you look at the profile of their group that it (scrummaging) will be one of their starting points in the game and, if you look at how England plays, in many ways it has to be," added Deans.

"We are conscious of that and have prepared to that end, and it's a contest that we are really looking forward to.

"We've done okay in our set piece in our recent experiences against England and this line-up is chosen on form, on blokes who have earned the right and it's an area that we will be seeking to do well in, but there's nothing new in that."

Elsewhere, Drew Mitchell returns to the wing in place of the injured Adam Ashley-Cooper, while captain Rocky Elsom is the only starting player to have featured from the off when the Wallabies beat England 18-9 at Twickenham in November.

Star scrum-half Will Genia is fit enough to be named among the replacements after injury had threatened to rule him out until the Tri Nations.

"We've broadened the playing base a fair bit, and Saturday is a great opportunity for the newer players," continued Deans.

"We've already seen a few guys put their hands up in the first two outings that we've had as a squad. We will be looking for more of the same on the weekend coming.

"England have got a group of great experience in all types of circumstance that is looking to impress. We saw many of the traits we will see again this weekend during the Tour match on Tuesday night, most notably the composure England showed after falling behind in the game, and also the direct nature of their play.

"Martin [Johnson] and his team will be determined to deliver a statement of intent, both looking ahead to the rest of this tour but also on to next year and the World Cup, there's no doubt about that."

Australia (vs England in Perth, Saturday, 11am BST)