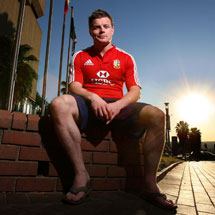 O’Driscoll gave his coaches and team-mates a scare this week when he missed training after complaining of dizzy spells ahead of the New Plymouth encounter.

The triple Lions tourist, who led Britain and Ireland’s elite in the Land of the Long White Cloud five years ago, admitted he had taken medication in an attempt to relieve the symptoms but was confident he would be fit for the first game of Ireland’s summer tour.

"I feel okay, a bit better than last night so I'll be grand in another 24 hours," said O’Driscoll, who will be hoping to end a 105-year drought by securing an Irish victory over the All Blacks.

"I get a little bit of vertigo now and again. I haven't had it for a while but I'll be grand.

"Last night I felt a little bit dizzy and went to bed, felt a bit better this morning, so just took a bit more medication and I'll be grand.”

The illness is similar to the incident that forced him to miss Ireland’s Grand Slam celebratory dinner last year – something which wasn’t stress related and which cleared relatively quickly.

Ireland ran New Zealand close the last time they visited the country but the Emerald Isle have never beaten the All Blacks in 22 previous matches.

Ireland went through the entire calendar year in 2009 unbeaten but their form has dropped off in 2010.

O’Driscoll and co slipped to defeat in Paris in February, before suffering a surprising reverse against Scotland at Croke Park the following month and the centre knows an improvement will be needed if the All Blacks are to be toppled.

"We have to play better," added O’Driscoll.

"We have to play one of our better games in an Irish jersey, collectively, not just seven or eight of us.

"Any time we've been in with a shout we've taken the foot off or New Zealand have put us under pressure for the last 20.

"It's about playing a full 80 minute game and trying to play as much attacking rugby as possible."