Rhys Ruddock's remarkable rise to fame will continue in Rotorua on Friday night when the teenager makes his senior Irelanddebut in the uncapped match against the New Zealand Maori. [more] 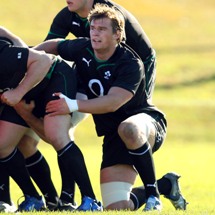 Rhys Ruddock’s remarkable rise to fame will continue in Rotorua on Friday night when the teenager makes his senior Irelanddebut in the uncapped match against the New Zealand Maori.

Ruddock, son of former Wales’ 2005 Grand Slam coach Mike, has been flown from Argentina, where he has been captaining Ireland Under 20 at the IRB Junior World Championships, to help out the senior squad following the sending off of Jamie Heaslip and injuries to John Muldoon and Mick O’Driscoll.

Still only 19, Ruddock was being groomed to play for Waleswhile at the Ospreys academy, but instead chose to play for the land of his birth, Ireland, as he followed in the footsteps of his Welsh-born brother, Ciaran.

Their father played for Swansea and Wales B before an accident curtailed his promising career. He then went on to coach Swansea, Leinster, Ebbw Vale, the Dragons and Worcester Warriors, as well as Wales.

“It was a huge surprise to me when the Ireland Under 20 coach Allen Clarke came up to me and said that that I had been invited to join the tour," said Ruddock.

“The season went really well for the U20's with our Six Nations Championship win and I felt I was going alright in terms of my own performances. My ultimate aim is obviously to represent Ireland and I certainly didn't think that I would get a call up to the senior squad so early in my career.

"My focus now is just to learn as much as I possibly can and make sure that I don't let the opportunity pass me by.I trained for the first time this afternoon and the welcome from the guys was great.

“I just want to train hard over the next couple of days and if the coaches feel they want me, I am ready to do whatever they need me to do."