To go or not to go

The current global gathering of round-ball enthusiasts is earmarked to change the perception of Africa forever. [more] 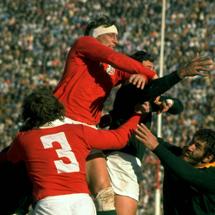 The current global gathering of round-ball enthusiasts is earmarked to change the perception of Africa forever.

For the first time in its 80-year history, the Football World Cup has chosen the continent as the host of its most high-profile competition.

This summer, the most-sought after prize in the game will not be won on European, South American or North American soil. Instead, football’s governing body have set a precedent that they hope will have an impact upon issues far wider than simply sport.

But while you will be hard pushed to find an ardent critic of the decision to award South Africa the 19th Football World Cup, it was a very different story when the country hosted another major sporting event 36 years ago.

When the Lions agreed to tour South Africa in 1974, there was widespread condemnation of the decision.

With the country still in the grips of apartheid, critics voiced their concerns that bringing Britain and Ireland’s elite to South Africa would somehow validate the government’s repressive regime.

Demonstrations put the adventure in doubt right until the last minute yet the tour that followed remains the most successful in Lions history. Unbeaten in all 22 tour matches, the Lions rocked the Springboks’ air of invincibility thanks to a 3-0 series victory that has not come close to being matched ever since.

But while rugby lovers look back at that tour with great pride and admiration for the achievements of a Lions side that will live long in the memory, others still harbour doubts that touring South Africa at that time was the right thing to do.

With that in mind, we take a look at two opposing views – both from within the Lions camp.

Firstly, we listen to the great Willie John McBride, five times a Lions tourist and an inspirational captain on the 1974 tour of South Africa.

Then we hear the views of fellow Lion John Taylor, a Welsh hero who toured South Africa in 1968 and New Zealand in 1971 but chose not to join McBride three years later.

"The backdrop to the tour was proving far from easy at home, for South Africa was not a popular place to visit. The debate over apartheid was raging.

"I strongly favoured the first option, but a lot of people were against the tour. Even Harold Wilson, the then British prime minister, said publicly that we should not go.

"When the four home unions’ committee reiterated their determination to see the tour through, Wilson instructed all the embassies in South Africa to sever any ties with the touring party. Now I’m a member of the British Empire and that was not a very pleasant message to my ears. In fact, it deeply annoyed me, but I never discussed it at the time…I am one of those people who, if I believe in something, will always see it through.

"Once the touring squad, had been announced, there was a lot of pressure on the individual players. They were being telephoned by outsiders and urged not to go. I didn’t want the tour to fall down but I knew that if it was going to, it would do so before we left. All I felt was that rugby football would never have existed if we had allowed it to become embroiled in politics.

"At that stage, I had played the game for 20 years and I felt that I had to preserve it. I was very clear in my own mind that my going to South Africa would neither encourage nor destroy apartheid, but I felt it might just help relations because, for the first time, we were due to play a coloured team and also a black team. So I hoped that it might even begin the process of breaking down the notion that a white man could not play against a black man on the same sporting field in South Africa. At least the 1974 Lions were going to demonstrate to all South Africa that such a law was nonsensical.

"In the event, it was to prove an amazing experience. We had to have special permits to get into their areas, but to play a match in front of 50-60,000 black faces was something entirely new. They were hugely enthusiastic, too, and gave us a great reception.

"The game against the couloureds was another memorable occasion and we had the chance to mix and chat with their players afterwards over dinner, which we all thoroughly enjoyed. We saw that as something of a breakthrough, which was important.

McBride is one of the game's most-respected figures

"When the chosen squad met up, manager Alan Thomas and coach Syd Millar gave their views on the tour and then it was my turn to speak. I stood up and said, ‘I realise the pressures you are under. For my part, I have no problem listening to these people (the protestors) and their views, but why aren’t they respecting my views as well? It’s not all one way’. I could see 29 faces scruitinising me and listening to my words as I went on, ‘I know there are pressures on you and there must be doubts in your minds, but if you have any doubts, I would ask you to turn around and look behind you’.

"There, at the end of the room, two huge doors were then pulled symbolically open. Once that had been done, I spoke again. ‘Gentlemen, if you have any doubts about going on this tour, I want you to be big enough to stand up now and leave this room. Because if you do have doubts then you are no use to me and no use to this team. There will be no strain on your character, no accusations if you do so, but you must be honest and committed’. Not a soul moved. And I believe that was the moment when the 1974 Lions united and we became a special team."

McBride was writing in his autobiography Willie John: the story of my life.

"I actually made my decision six years before that tour. I went on the '68 tour and the moment I got there I realised it was a mistake. I'd had misgivings but I was desperate to play. I was 22. I wanted to be a Lion. I put all the misgivings to the back of my mind, believed all the twaddle about building bridges and that we weren't supporting apartheid and as soon as I got there I realised very much that we were.

"The night before we left, the high commissioner or the ambassador said something to the effect of, 'Don't get involved in our politics; you won't understand them. But our rugby and our girls are great so go and enjoy them’. And then, when we got out there and had our first night in a hotel in Stilfontein, a group of real Afrikaaners came to our hotel and, without any prompting from us, launched into an aggressive defensive of the apartheid system and how this was the only way to treat the blacks and so on and so forth. I thought, 'Bloody hell! What have I come into?'

"I was injured in the first game we played and really wasn't fit again on the whole tour and I had an awful lot of time to see what was really going on in South Africa. I got left behind by myself in a couple of places to get treatment and you saw the real South Africa, as it was – not just the Lions' eye of it. It troubled me.

"So it was really when I came back from that tour that the decision was made. In fact, the really big decision was not to make myself available for Wales when the Springboks came over here in 1969-70. In '74 the Lions were going through the motions with the invitation letter because they knew what the answer was before they ever sent it out.

"But '74 was the big deal. I was absolutely convinced that the rest of the sporting world was right and that there was this sort of massive arrogance in rugby that the brotherhood of rugby, the fraternity of rugby, meant more than the brotherhood of man – that they couldn't be bad chaps because they played rugby. It was very much that sort of arrogance that I absolutely deplored in rugby. I had no doubts at all. "

Taylor was talking to Simon Turnbull in the Independent.