Veteran British & Irish Lions lock Simon Shaw has been dropped to the bench for England's second Test against Australia in Sydney on Saturday. [more] 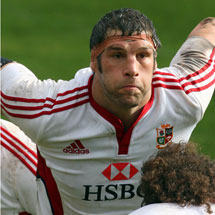 Veteran British & Irish Lions lock Simon Shaw has been dropped to the bench for England’s second Test against Australia in Sydney on Saturday.

England manager Martin Johnson has promoted young guns Courtney Lawes and Ben Youngs into his starting line-up as his side seek to square the series after losing 27-17 in Perth last weekend.

But  Johnson has resisted the temptation to recall Jonny Wilkinson to the starting XV to give him the chance of re-enacting his famous drop goal antics that wpon England the World Cup at the same ANZ Stadium in 2003.

Toby Flood remains at No 10 and Bath centre Shontayne Hape continues in the midfield alongside Mike Tindall after making last weekend. Leicester Tigers scrum half Youngs comes into the back line ahead of Danny Care, while Northampton Saints giant Lawes takes over from Shaw in the second row.

The only other change sees Delon Armitage take over from Mathew Tait on the bench after an impressive display in the midweek win over the Australian Barbarians..