The Wallabies have lost the services of their most experienced forward, 32-year-old lock Nathan Sharpe, for the clash with Ireland in Brisbane on Saturday. [more] 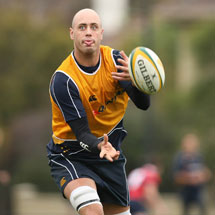 The Wallabies have lost the services of their most experienced forward, 32-year-old lock Nathan Sharpe, for the clash with Ireland in Brisbane on Saturday.

The 82-times capped Western Force skipper has been forced out of the side due to a back complaint and will be replaced by Brumbies lock Mark Chisholm, who moves up from the bench. Mitchell Chapman, who played in both games for the Australian Barbarians against England, joins the replacements.

Even though the Wallabies have dropped out of the top three in the IRB World Rankings due to their one point defeat to England last weekend, they remain one of the most potent forces in the world game.

As well as winning the Rugby World Cup in 1991 and 1999, they were finalists in 2003 and semi-finalists in 1987. Their Under 20 team also reached the final of the IRB Junior World Championships in Argentina this month.

While the Irish Test will be their final outing before the Tri-Nations Tournament begins, they have two major targets in mind – the 2011 Rugby World Cup and the 2013 British & Irish Lions tour.

With the Lions tour in mind – it will be the 125th anniversary of the first tour made by the Lions in 1888 – the age profile of the current Wallabies squad shows the tourists are likely to run into a pretty mature side in three summers time.

Robbie Deans’ 22 man squad to face Ireland has an average age of 24, which would be reduced if the injured scrum half Will Genia (22) and wing Digby Ioane (24) were included.

So. there is so much more to look out for in Brisbane this weekend than whether or not the Wallabies can bounce back from last weekend’s defeat in Sydney. You could be watching the birth of a side of would-be Lions tamers.