Michael Owen, the only man to have captained the British & Irish Lions in a home Test, has been forced to quit rugby because of a knee injury. [more] 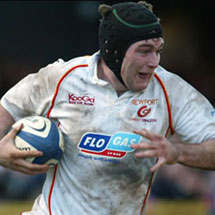 Michael Owen, the only man to have captained the British & Irish Lions in a home Test, has been forced to quit rugby because of a knee injury.

The 29-year-old Saracens No 8 led the Lions in their drawn international against Argentinaat the Millennium Stadium in 2005 before heading Down Under to New Zealandfor the three Test campaign against the All Blacks.

He played in six games on the tour, leading the side again in the midweek win over Southland, but failed to break into the Test team in the 3-0 series defeat. He returned home during the tour for the birth of his second daughter, but flew back to New Zealandand played in the final non-Test fixture against Auckland.

Owen was capped by Walesat Under 19 level and led his country into the final of the IRB Under 19 World Cup in Walesin 1999. He went on to play for Pontypridd, NewportGwent Dragons and finally Saracens.

He became Wales’ 1,000th international when Steve Hansen capped him against South Africa in 2002 and went on to win 41 caps, including appearances in the 2007 Rugby World Cup.

He played second row as well as No 8 for his country and took over the captaincy of the 2005 Grand Slam winning side when Gareth Thomas picked up an injury half-way through the campaign.

He joined Saracens at the start of the 2008/09 season, but had his career with the English club wrecked by a stream of injuries, the final one being a knee problem picked up in an Amlin Challenge Cup clash with Toulonlast season.