A year on and the Lions’ roar can still be heard

If at first you don't succeed, try, try again! Was that the motto used by Paul O'Connell's battered, bruised and seemingly down and out British & Irish Lions 12 months ago. [more] 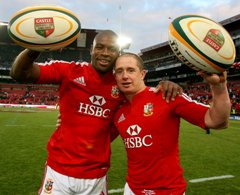 If at first you don’t succeed, try, try again! Was that the motto used by Paul O’Connell’s battered, bruised and seemingly down and out British & Irish Lions 12 months ago.

If it wasn’t, then it must have been something pretty similar because the Lions dug deeper than ever before to conjure up one of their greatest results.

A year on and the sweet taste of victory still hasn’t deserted the Lions players and fans following the 28-9 triumph in the third and final Test in Johannesburg.

A week on from the heartbreak of Pretoria, the Lions rose magnificently to the occasion to halt the Springboks taking the series 3-0. While the home side made 10 changes to the team that had triumphed with that injury time penalty from his own half by Morne Steyn, Ian McGeechan had made eight, one positional, to his starting line-up.

The brutal intensity of the Loftus Versfeld clash in Pretoria seven days earlier had seen five Lions taken to hospital and four of them ruled out of the game – the centres Brian O’Driscoll and Jamie Roberts and the props Gethin Jenkins and Adam Jones.

Tommy Bowe was moved into the centre from the wing to join Riki Flutey, Phil  Vickery was recalled to try to make amends for his problems in the First Test and Martyn Williams was finally handed his first Test start for the Lions in the final game of his third tour.

The series may have been lost, but there was still a huge amount at stake for O’Connell’s team. There was the individual and collective pride among his players, as well as the Test credibility of the Lions.

Victory made it a rousing end to the tour, as well as a fitting coaching finale for McGeechan, and also meant the Lions:

The Welsh wing wizard Shane Williams put “two fingers up” to his knockers as he guided the British & Irish Lions to one of their most famous victories at Johannesburg’s renowned Coca Cola (Ellis Park).

After being overlooked for the first two Tests in the three match series against the world champion Springboks, the 2008 World Player of the Year hit back with two tries in seven magnificent first-half minutes to guide the Lions to a record equalling 28-9 triumph – and take his international try tally to 48.

It was a performance that allowed legendary coach Ian McGeechan to end his seventh tour as player and coach with an eighth Test triumph.

The Boks hadn’t been beaten at Ellis Park, the venue for their 1995 World Cup victory, since 2001, but the twinkle-toed Williams provided the fire power for the tourists to give them a win they thoroughly deserved.

Facing a potential first whitewash in 118 years in South Africa, Paul O’Connell’s men had to dig deeper than ever before to conjure up a win that ended a horrendous run of eight Tests without a victory.

With four front line players ruled out from the second Test with injuries, the patched up Lions roared their way through another hugely physical contest and stuck it to John Smit’s men just as they were hoping to kill off the Lions.

The Boks had made 10 changes to their line-up from last week’s smash and grab raid in Pretoria, while Ian McGeechan made eight for what might well prove to be his last game in charge of the Lions after seven tours.

One of the players promoted into the front line for the first time by McGeechan was England warrior Joe Worsley and his wrecking ball tackling made some immediate dents in the Boks as it quickly became obvious the Lions were ready to put their bodies on the line.

Worsley smashed down Springbok talisman Smit in one early tackle and Phil Vickery returned to the front row to prove his first Test failure was simply a bad day at the office as he murdered Tendai ‘Beast’ Mtawarira at the opening scrum.

Where England’s old guard led, the Welsh warriors followed and Williams popped up in exactly the right place at the right time twice in the first-half to reward the Lions’ dominance with two tries at the posts.

The first followed a brilliant drive from Irish No 8 Jamie Heaslip, who then popped the ball inside to the Welsh wing wizard to allow him to race clear. Stephen Jones had a simple conversion from in front of the posts, but the ball fell over and two points went begging.

Jones had earlier kicked a penalty, but it was Williams second strike seven minutes before the break that gave the Lions some real breathing space on the scoreboard. This time it was a flash of brilliance from debutant Riki Flutey that created the opening.

The Wasps centre chipped over the first lien of defence and then leapt high to flip the ball inside to Williams who scampered away for his second score. This time Jones made no mistake with the conversion and not even a silly penalty on the stroke of half-time could dent the Lions’ confidence.

Just before the break the Lions lost Simon Shaw to the sin bin for a reckless challenge on Fourie du Preez, but that second Morne Steyn penalty was the only points the tourists conceded while he was off the field.

The Springboks upped the ante, and began to get embroiled in off the ball tactics, but Ugo Monye killed them off with a 70 metre interception try after 54 minutes. Jones converted, added two late penalties and the Lions were home and dry.

WHAT THEY HAD TO SAY

"The Lions had more intensity and their win was well deserved. I don't think my guys were in the right frame of mind and evidence of that was in the rucks and mauls

"This defeat will make sure we keep our feet on the ground and keep on working hard. It was a great series, and a fantastic series win, but we are obviously very disappointed to have lost this match.

"This series victory ranks alongside our World Cup win. A Lions series is a rare occasion. I had two cracks at the World Cup, but this was my first and last against the Lions.

"Test rugby is not about kissing your opponent on the cheek, but now we can all have a few beers together. We'll take the series win and in 10 or 20 years time we can look back at all of this and have a lot of fond memories.”

“It’s a great way to stick two fingers up to people who felt I wasn’t good enough. I know I’ve been good enough from the start. I was just glad I got the chance to play. I was rubbing my hands with glee when I was named in the starting line-up.

“I wanted to go out with a bang in my last chance in a Lions jersey. I know I haven’t been playing to my potential and the frustrating thing is that after this game I know what I’ve been doing wrong.

“It’s an incredible feeling having finally won in a Lions Test. I am really proud to have been a part of this team and it’s just a shame we lost the series 2-1. It’s my first win over the Springboks in nine attempts and my last game for the Lions.

“I came off the field shattered, but it was a game I really enjoyed. I didn’t force things and got the ball in my hands. I went out to enjoy myself and that’s exactly what I did. I worked my socks off and at half-time I was looking for a set of new lungs.

“Our defence was incredible and we can hold out heads up high and go home happy. We have been a tight knit family on and off the field from the start and we deserved this result today.

“We’ve worked hard from day one. We felt we deserved something out of this tour. We’ve proved the Lions have a massive future. I’ve never been on such a good tour and it’s the toughest rugby you’re ever going to play.

“Playing for the Lions is the pinnacle of my career and it is something that should continue for ever.”