Collins would play with one arm

Jerry Collins says he would play for the Ospreys with one arm if necessary. [more] 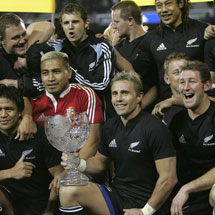 Jerry Collins says he would play for the Ospreys with one arm if necessary.

The former All Black is currently recovering from knee and shoulder surgery and hopes to be fit in time for the start of the new season.

"I'm already working my hardest to get out there come day one," Collins, who helped New Zealand whitewash the Lions five years ago, told the Ospreys website.

"Obviously, it'll all depend how the rehab goes, how pre-season shapes up. I'm running around again, but I'm waiting for the arm to get strong enough to do the gym work in order to sort that out.

"I could play with one arm – I would if I had my own way – but I think that would do a disservice to the team. I don't suppose the coaches would be too happy about it either!"

Collins was one of his region’s most-consistent performers last season, playing more minutes than any other Osprey as the Liberty Stadium outfit captured their third Magners League crown.

The New Zealand blindside played through the pain barrier towards the end of the campaign and decided to have both operations at the same time in order to be back playing again as soon as possible.

"It's not easy having two parts of your body done at the same time, it's quite a difficult experience, but both surgeries have gone pretty well," added Collins.

"I feel pretty good considering. The medical team are happy. They've done a really good job at sorting out the ligaments and the bits and pieces, and it seems to be healing quite well.

"I'm concentrating on doing my rehab now, working towards next season and just biding my time really."
Collins admits that last season took a lot out of him but he says he enjoyed every minute and is already looking forward to beginning the new season with a bang.

The star blindside arrived in Swansea from French side Toulon 12 months ago with a hefty reputation and huge expectations from the Ospreys faithful.

Collins hadn’t fulfilled his potential during his time in the Top 14 but the 29-year-old was back to his best during his first year in Wales.

"As far as next season is concerned, it's just a race to get back playing again now. I had such a great time last year, I really enjoyed my rugby and just want to get back out there playing as soon as I can.

"I suppose I arrived here last summer with something to prove. I think every player kind of goes through a patch where they lose their mojo a little bit, I suppose that's the best way to put it.

"After my experiences before that, last season was one of those years that I was really happy with. This year now is a massive one, not only for me personally, and for the Ospreys, but there's a World Cup on the horizon as well which should add some intensity to what's going on."