The All Blacks gained revenge for their Tri-Nations whitewash by the Springboks last season as they gained a bonus point victory over the world champions at Eden Park. [more] 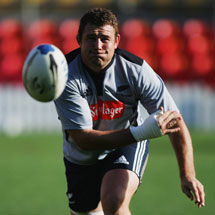 The All Blacks gained revenge for their Tri-Nations whitewash by the Springboks last season as they gained a bonus point victory over the world champions at Eden Park.

Prop Tony Woodcock was driven over for the vital fourth try with the last move of the match to complete a 32-12 triumph that left John Smit’s South African team will plenty to ponder ahead of next week’s second game in Wellington.

All Blacks coach Graham Henry had described the game in Auckland as “a defining moment in our season” and his players delivered an 80 minute performance of huge intensity and physical commitment.

Their latest victory at Eden Park – it was their 21st in a row – over South Africa left the visitors still waiting for their first Test victory since 1937. Defeat also stopped the Springboks from making it three wins in a row over their arch-rivals New Zealand for the first time in their history.

Centres Conrad Smith and Ma’a Nonu crashed over for first-half tries and with Dan Carter adding both conversions and two penalties the home side were well in command at 20-3 at the break.

The Springboks lost controversial lock Bakkies Botha to the sin-bin in the first half for killing the ball close to his line and they could lose him for longer than 10 minutes following his head butt in broken  play on Jimmy Cowan.

Smit’s men raised their game at the start of the second half and briefly got themselves back into the running with two more Morne Steyn penalties in the opening seven minutes.

Steyn then pushed a snap drop goal attempt, his second of the game, just wide of the posts and that was it as far as the Springboks were concerned in threatening to add to their score.

Instead it was the All Blacks who raised their game again and put themselves in an almost unassailable position with a try from No 8 Kieran Read. Jerome Kaino and outstanding lock Tom Donnelly made the initial running and then replacement scrum half Piri Weepu picked out the charging Read for the scoring pass as he barged through opposite number Piere Spies and Ricky Januarie.

Carter’s conversion took his tally of points against South Africa to 199 and not even a fourth Steyn penalty two minutes later could threaten to derail the All Blacks’ revenge mission.

Woodcock’s last minute try put the icing on top of the cake for the home side, while the defending Tri-Nations have a lot to work on before they meet the All Blacks again in Wellington.