Lions centre Jamie Roberts faces a substantial spell on the sidelines after it was announced that he requires surgery on a wrist injury. [more] 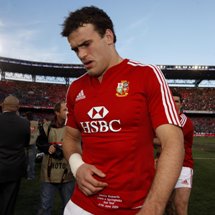 Lions centre Jamie Roberts faces a substantial spell on the sidelines after it was announced that he requires surgery on a wrist injury.

Roberts suffered the initial damage during the 2009 Lions tour of South Africa but battled back to play an important role for both region and country last season.

Unfortunately the injury has failed to heal properly, with Roberts, who was voted HSBC Player of the Tour on his first Lions adventure, playing through the pain barrier last term.

“I injured my wrist during the second test in South Africa last year. I had a couple of MRI scans which unfortunately didn't pick up the injury and it wasn't until the surgeon had a look with a camera into the joint at the end of the season that the full extent of the injury was diagnosed,” said Roberts, who played in both Wales’ summer Tests against New Zealand, scoring a try in the second rubber in Hamilton.

“Unfortunately it needs an operation to stabilize the wrist. I played all of last season with a lot of pain in my wrist and so it is logical to get it sorted as soon as possible.

“It's pretty disappointing to be missing more or less the first half of the season, but I will certainly use the time whilst injured to rid my body of any niggles I have and come back to the field in good knick.”

No official timescale has been set for Roberts’ return but the 23-year-old hopes to be back in international action as soon as possible as Wales look to build on a promising second-Test performance against the All Blacks ahead of next year’s World Cup back in New Zealand.

Roberts is likely to miss the autumn internationals, as well as the opening four rounds of the Heineken Cup and the first half of the new Magners League season but he still hopes to play an important role for both club and country at some point next term.

“Obviously the aim for us at the Blues this year is to build on our achievements from last season,” added Roberts – a try scorer in last season’s Amlin Challenge Cup triumph over Toulon.

“We certainly have the talent to be successful and I'm sure come the first match the boys will be ready to stamp their mark on what hopefully will be another successful season for us.

“The competition at centre is very strong again this year. Casey Laulala, Tom Shanklin, Dafydd Hewitt and Gavin Evans are all quality players. We’ll all have our work cut out for sure and competition for places is certainly healthy amongst us.

“I thoroughly enjoyed the (Wales) tour. As players we want to be playing and testing ourselves against the best sides in world rugby and New Zealand is certainly a very tough place to play.

“Without a shadow of a doubt the squad benefited from the tour, by playing the best we get to know the standard of what's required to beat these teams.

“I I was very happy to get two starts on the tour and was pleased with my own form. However, with the Rugby World Cup looming next year the squad know the intensity and the standard that's required.”