Australia wing Peter Hynes has been forced to withdraw from his country's Tri Nations squad. [more] 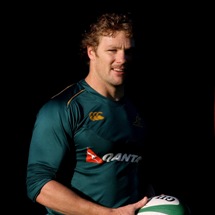 Australia wing Peter Hynes has been forced to withdraw from his country’s Tri Nations squad.

The Reds star suffered a knee injury in training on Monday and now joins clubmate Digby Ioane on the sidelines.

The setback for the 2008 Wallaby Rookie of the Year is thought to be a reoccurrence of an old injury, with no date yet set for his return.

The Wallabies have simply stated that Hynes will be out of action ‘indefinitely’, hinting that he might miss the entire Tri Nations campaign.

Hynes has been replaced in the squad by Waratahs wing Drew Mitchell, who was a surprise omission from the original party.

Mitchell was dropped by head coach Robbie Deans following the summer Tests against Fiji, England and Ireland but has been in impressive form for his club side over the past two weeks.

The 26-year-old scored four tries for Randwick on Saturday, a week after crossing for a stunning solo effort that saw him regather his own chip ahead before beating eight defenders in a match against Sydney University.

Western Force duo Cameron Shepherd and Nick Cummins have also been added to the squad, with Deans deciding to increase his options ahead of the Tri Nations opener against South Africa in Brisbane on July 24.

Star scrum-half Will Genia is likely to be fit for that match after having two pins removed from his right thumb following a fracture.

Genia suffered the initial injury in last month’s defeat to England and missed the following week’s game against Ireland.

The stand-in Reds skipper, who was one of the stars of last year’s northern hemisphere tour, had the pins removed on Monday morning and has been told that his thumb will soon be 100-per-cent.

Genia took part in a Wallaby training session on Monday and, although he will wear a splint for the next couple of weeks, he will take part in a club match this weekend and is confident he will be fit to feature against the Springboks.

Meanwhile, Ioane, who is recovering from a dislocated shoulder, hopes to be back in time for the Wallabies’ second Tri Nations fixture against the All Blacks in Melbourne on July 31.