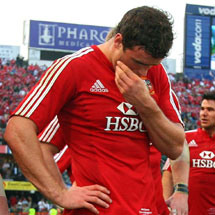 The 23-year-old returned from the 2009 Lions tour as one of the most-talked about players in world rugby.

Roberts was voted HSBC Player of the Tour thanks to a series of stunning performances having travelled to South Africa far from the favourite to partner Brian O’Driscoll in midfield.

Since returning home, Roberts has cemented his position in the Welsh side and helped Cardiff Blues claim Amlin Challenge Cup glory.

But critics would argue that Roberts hasn’t hit the peaks of his first Lions adventure.

A wrist injury ended Roberts’ tour after the second Test against the Springboks and, despite battling on throughout last season, Roberts has now decided to have surgery to correct the damage.

"Jamie has had the problem for a while although you wouldn’t have known it from watching him play against New Zealand last month when I thought he was outstanding,” said Young, himself a Lion in 1989, 1997 and 2001.
"But it has stopped him from playing the game he wants to play and so he is getting it seen to.

"To lose someone like Jamie would be a blow to any side, not only because of his quality but also his sheer presence unsettles opposition.

"But the flip side is that it creates an opportunity for Dafydd Hewitt and Gavin Evans, who have found it difficult with Jamie, Tom Shanklin and Casey Laulala to get past."