Courtenay Meredith has paid tribute to his 1955 British & Irish Lions front row colleague Robin Roe, who has died at the age of 81. [more] 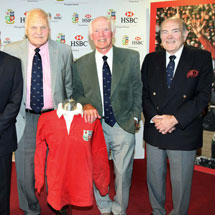 Courtenay Meredith has paid tribute to his 1955 British & Irish Lions front row colleague Robin Roe, who has died at the age of 81.

Meredith and Roe packed down together four times on the South African tour. Roe managed 12 appearances on the trip, despite picking up a rib injury early on.

“Robin was a charming man and a great tourist. Everyone got on very well with him and he was a very fine player,” said Welsh prop legend Meredith, who played in all four Tests.

Roe, who had taken over as the Irish hooker from the 1950 Lions captain Karl Mullen, made the trip to South Africa shortly after being ordained as a Priest in the Church of Ireland. He thus followed in the footsteps of the Rev Matthew Mullineux, who was a practising clergyman when he captained the 1899 Lions in Australia.

First capped by Ireland in 1952, Roe made the position his own for five years as he figured in 21 out of 22 Irish Tests. He was one of two hookers chosen for the 1955 tour, but saw Bryn Meredith take the Test spot in what became an all-Welsh front row for the four internationals against the Springboks.

He learned his rugby while a pupil at Kings Hospital School, in Dublin, and then went on to play for Lansdowne, Leinster, London Irish, the Army and the Barbarians in a playing career that didn’t end until he was 40.

Immediately after returning from South Africa he joined the British Army and went on to win a Military Cross for bravery while serving in Aden in 1968. He was promoted to Chaplain to the Forces 2nd Class (Lieutenant-Colonel) in 1969 and to 1st Class (Colonel) in 1973.

In 1977 he was made an Honorary Chaplain to the Queen and he retired from the Army in 1982. He was made Commander of the Order of the British Empire for his work as a chaplain in 1982 and became the Rector of Merrow, Surrey.

He served there for seven years before retiring to Shalford, Surrey.