Another Lion to League?

Daffyd James could be about to follow fellow Lion Gareth Thomas to Rugby League. [more] 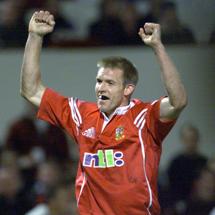 Daffyd James could be about to follow fellow Lion Gareth Thomas to Rugby League.

James is currently without a club after being released by Sale Sharks but the 34-year-old former Wales wing has no intention of hanging up his boots.

The second-highest try scorer in the history of the Heineken Cup, James has been linked with a cross-code switch to the Welsh Rugby League outfit the Crusaders – the same side that 2005 Lions stand-in skipper Thomas joined earlier this year.

And while 2001 Lion James says his preferred option would be to stay in Union, he does admit that a change to the 13-man version of the sport is a definite possibility.

"I'm as fit as ever, highly motivated and looking to continue playing top flight professional rugby for another one or two seasons," said James, who played in all three Lions Tests against the Wallabies nine years ago, scoring a try in the first.
"I'm looking at all possibilities, including a switch to league with the Crusaders, although my main ambition at the moment would be to stay in union.

"It was a frustrating and disappointing time last season – at Cardiff my opportunities were limited and when I moved to Sale we were in a relegation battle.

"But I've grown from last season and I am probably a better professional for it."