The 2013 Lions tour to Australia may still be three years away but it's never to early to start assessing the extent of the challenge ahead. [more] 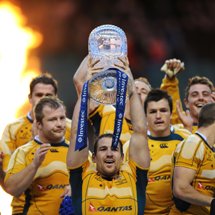 The 2013 Lions tour to Australia may still be three years away but it’s never to early to start assessing the extent of the challenge ahead.

From now until the tour itself, lionsrugby.com will be taking a closer look at all things Wallaby related.

We’ll be previewing and reviewing Australian international matches, discussing potential stars of the series and looking at the strengths and weaknesses of the Men in Gold.

We start this month with a look at Australia’s upcoming Tri Nations campaign, a tournament that will give us a better understanding of exactly where this current crop of Wallabies stand in world rugby.

When the Lions last arrived in Australia nine years ago, the Wallabies were on top of the world.

John Eales and co had claimed World Cup glory in Cardiff in 1999 and the Wallabies would win back-to-back Tri Nations titles prior to and after the Lions tour.

There was no doubt that the Lions’ class of 2001 faced the world’s best, one of the most efficient and effective sides the game had ever seen. Those Wallabies knew how to perform when it mattered; they knew how to deal with the weight of expectation; and they knew how to win.

They were a side full of household names at the peak of the powers, with Eales joined by the likes of George Gregan, Stephen Larkham, Joe Roff and Owen Finegan, with future Wallaby all star George Smith just beginning his stellar international career.

The current crop of Wallabies are a different breed. Smith may have just called time on his international days but there are now a whole new group of youngsters donning the famous gold jersey.

Deans has placed his faith in youth, with James O’Connor, Quade Cooper and Will Genia just three of the youngsters to have already made a substantial mark on the world stage.

Quade Cooper is one of Australia's latest generation of stars

Throw in experienced yet far from aging athletes such as Matt Giteau and Rocky Elsom and the Wallabies certainly have an impressive side on paper.

But the Wallabies appear to lack real leaders. They seem shy of knarly old veterans like Victor Matfield or Bakkies Botha and they definitely remain underpowered in the front row once you bypass their first-choice combination.

As far as this year’s Tri Nations is concerned, glory is likely to evade them as they remain in a rebuilding process. It’s almost been a case of revolution rather than evolution since Deans took charge, and while the exciting young talent are more than capable of beating the Boks and the All Blacks, doing so on a regular basis right now is a far stiffer task.

The 2011 World Cup probably offers a better chance of success than this year’s Tri Nations, with the bright young stars of Australian Rugby set to benefit from another season of Test-level experience under their belts.

Fast forward two more years and this Wallaby side could once more be on top of the world rankings. And given the recent luck of the Lions in facing the world’s best or at least the World Champs on each of their last three tours, you certainly wouldn’t bet against it.

Saturday’s clash with South Africa in Brisbane might be the Wallabies’ Tri Nations opener but it’s the third game in as many weeks for the battle hardened but possibly match-weary Boks.

The conquerors of the 2009 Lions began their Tri Nations campaign with successive, comprehensive defeats to the All Blacks.

One particular aspect of history would favour the Wallabies, with Australia having lost just three of their 17 internationals in the professional era at Brisbane’s Suncorp Stadium, formerly known as Lang Park.

The Boks have a 5 and 0 record at the ground, with the 5 being loses and the 0 being wins. That record includes a 49-0 thrashing in 2006 that still brings South Africans out in cold sweats.

Robbie Deans’ men won last year’s encounter 21-6 at the same ground – their only victory in the 2009 Tri Nations – while South African Super 14 finalists the Bulls and Stormers both lost to the Reds in Brisbane earlier this year.

While the Boks arrive in Brisbane on a definite low as a result of back-to-back defeats in Auckland and Wellington, the Wallabies are hardly brimming with confidence themselves.

Having finished bottom of the pile in last year’s competition and not having won the Tri Nations title since the year they beat the Lions, Australia have plenty to prove this time around.

The Wallabies have been nothing short of superb in aspects of their recent attacking display but defensive inadequacies have let them down.

Inconsistency seems to the be the killer trait holding Australia back right now, with the paying public unsure as to which Wallaby side will turn up this weekend. Will it be the one that made England look nothing short of second-rate in most areas of the game during June’s first Test in Perth, or the one that was out-muscled, out-scrummaged and even out-fought during defeat to the same opposition a week later?

The Wallabies’ results since the Lions left South Africa

Nathan Sharpe, Benn Robinson and Genia all return for Australia after injury having missed all or part of the summer Tests.

Genia, who is already seen as one of the stars of the Wallaby set up despite being just 22-years-of-age, replaces the unfortunate Luke Burgess at scrum-half, while former skipper Sharpe adds his considerable presence to the second row.

Robinson's return will perhaps be the most important for the Wallabies however, with the Waratahs prop returning to bolster a front row that was comprehensively out-scrummaged during the recent two-Test series with England.

First-choice hooker Stephen Moore is named among the replacements as he works his way back from a broken jaw that has seen him play just once since mid-May, meaning the inexperienced Saia Faingaa remains in the starting lineup.

O'Connor moves out to the right wing, with Adam Ashley-Cooper starting at full back, while Cooper maintains the fly-half berth as Giteau starts at inside centre.

The Boks have made four changes to the starting side beaten 3131-17 defeat in Wellington.

Gio Aplon, who was on the bench last weekend, starts in place of the suspended Jean de Villiers on the right wing, while Ulster-bound Ruan Pienaar comes in for Ricky Januarie at scrum-half.

BJ Botha is named ahead of CJ van der Linde at tight-head prop, with Ryan Kankowski replacing Francois Louw in the back row.

There are further changes on the bench where Flip van der Merwe, Dewald Potgieter, Francois Hougaard and Juan de Jongh all come to a side that bears little resemblance from the one that secured a series triumph over the Lions just over 12 months ago.