Australia have appealed against Quade Cooper's suspension for a dangerous tackle. [more] 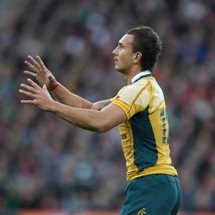 Australia have appealed against Quade Cooper’s suspension for a dangerous tackle.

The star fly-half was banned for two weeks following an incident involving opposite number Morne Steyn during the Wallabies’ 30-13 win over South Africa in Brisbane on Saturday.

The length of the ban means Cooper will miss this weekend’s Tri Nations clash with the All Blacks in Melbourne and the return fixture in Christchurch a week later.

The Wallabies have appealed the verdict and will now wait for tournament organizers Sanzar to set a date for the hearing.

Cooper was instrumental in his side’s comprehensive victory over the World Champions and his absence would be a huge blow to Robbie Deans and the Wallabies.

The Queensland Reds youngster has become a pivotal figure in the Australian side since making his Test debut in November 2008.

He played in all four Tests in Europe last November and was selected above Matt Giteau in the No10 jersey for the summer games against Fiji, England and Ireland before keeping his spot for the Tri Nations opener at the Suncorp Stadium.