One of Australia's central figures on the 2001 Lions tour could yet play a role when Britain and Ireland's elite head back Down Under in three years time. [more] 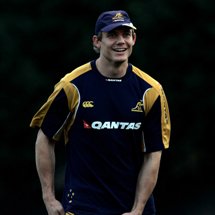 One of Australia’s central figures on the 2001 Lions tour could yet play a role when Britain and Ireland’s elite head back Down Under in three years time.

Stephen Larkham played in the first two Tests against Graham Henry’s tourists before injury ruled him out of the third and final encounter in Sydney.

One of the world’s most-capped players, Larkham retired from international rugby in 2007 with 102 caps to his name.

He is currently playing his club rugby in Japan with the Ricoh Black Rams but he will return home in November to take up a new role as attack coach with the ACT Brumbies.

The 36-year-old will initially join his former side on a two-year contract but that could be extended to incorporate a 2103 Lions tour that will more than likely feature a clash with the country’s most-scuccessful franchise.

The two sides last met in Canberra nine years ago in an absolute thriller, with a last-gasp Austin Healey try converted by Matt Dawson giving the Lions a spectacular victory.

Larkham didn’t feature in that match as he was in camp with the Wallabies but few would bet against the mercurial playmaker having a major impact if he remains in situ in the Australian capital when the Lions come calling once more.

“Steve’s credentials as a player are second to none and he is renowned as being one of the playing masterminds of the modern game,” said Brumbies head coach Andy Friend.

“He's always had an attacking mentality as a player and it will excite a large majority of the Brumbies faithful to see him returning to the club for 2011.”

Larkham isn’t alone when it comes to Lions adversaries taking up coaching roles with the Super 14 giants.

Former Wallabies lock Justin Harrison is set to become a specialist lineout coach with ACT, with his reputation having seemingly recovered after admissions of recreational drug use during his time with Bath.

Having been involved in a high-profile spat with Austin Healy during the Lions vs Brumbies encounter in 2001, Harrison made his Test debut against Martin Johnson and co in the crucial final rubber.

Unfortunately for the Lions, Harrison played a starring role, winning the man-of-the-match award as the Wallabies stole the series.

“Justin has always been a leader within the sides he's played for. He brings with him an incredible amount of intellectual property and a tremendous enthusiasm,” added Friend.