Double British & Irish Lion Donncha O'Callaghan is used to touring the world on rugby business, but the Munster and Ireland lock had some different tales to tell his team mates when he returned to training this week after spending seven days in Haiti. [more] 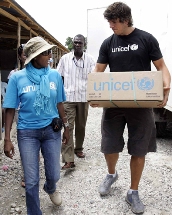 Double British & Irish Lion Donncha O’Callaghan is used to touring the world on rugby business, but the Munster and Ireland lock had some different tales to tell his team mates when he returned to training this week after spending seven days in Haiti.

O’Callaghan travelled to the earthquake ravaged Caribbean island as part of his duties as an Ambassador for Unicef Ireland. His trip coincided with the six month anniversary of the earthquake, which resulted in the deaths of more than 200,000 people.

At 4.53 pm local time on 12 January Haiti was struck by a magnitude -7.0 earthquake, the country's most severe earthquake in more than 200 years. The epicenter of the quake was just outside the Haitian capital Port-au-Prince. The capital city was devastated.and a month later the Haitian government gave a confirmed death toll of 230,000.

The Presidential Palace was badly damaged, with the second floor entirely collapsing onto the first floor; the Haitan Parliament building, UN mission headquarters and the National Cathedral were also destroyed. The main port was damaged beyond immediate use, the one local airport was of limited and as many as one million Haitians were left homeless.

“Meeting families who have been living in these unthinkable conditions is so difficult. They bear their fate with such dignity and fortitude, they are truly remarkable.”

O’Callaghan, who is an expectant father, visited one of the main camps in Champ de Mars, where over 15,000 people are currently living, and was invited to try out some of his fathering skills at the baby tent in the camp. In the last six months, some 23,000 mothers and babies have been helped through a network of 107 “baby-friendly tents” across Port au Prince, providing counselling on proper infant and young child feeding.

He also visited the Notre Dame de l’Assomption School in Port au Prince to take part in the special sports porgramme that has been set up for the 6,000 children living in the nearby camp. UNICEF run this programme in partnership with the Haitian Olympic Committee.

“The chance that these children are getting to play sport and enjoy themselves is so important for their health and well-being. It gives them a chance to be children and learn so many valuable life lessons,” added O’Callaghan.

There was also a visit to Leogane, on the outskirts of Port au Prince, which was at the epicentre of January's earthquake. More than 80 per cent of Leogane was flattened and the number of people lost in Leogane is still unknown.

Donncha visited a school there that was completely levelled by the earthquake. A dozen teachers still remain buried within the rubble. UNICEF has supported the re-opening of the school with temporary tents and school materials.

The Munster legend’s visit was well timed as he was able to help offload several new tents for additional classrooms as well as boxes of recreational kits and additional school materials for the children.

Temporary schools assisted by UNICEF are slowly restoring structure and stability for quake-affected children and providing them with and psycho-social support. But these efforts represent only the most urgent measures needed to ensure continuity of education amidst the emergency.

“Talking with older teenagers at the school you really begin to understand their fears for their future. You can tell that these kids really love being in school and they want to grasp every opportunity they can to learn so they can pursue their dreams,” he added.

“So many of them want to be doctors and teachers so that they can help their communities – it was truly humbling to speak with them. I was nothing like that focussed when I was their age”

The seven day visit saw the 6’ 7” O’Callaghan living in the tented village that currently makes up UNICEF’s headquarters in Haiti. Camp Charlie was a little bit different to O’Cllaghan’s last attempt at camping, in the family back garden when he was 11.

“I have such respect for all the UNICEF staff having spent the week at Camp Charli.It's incredible how they are staying here for months on end, living in these conditions and maintaining such high work standards,” added O’Callaghan.

“Sitting at dinner, watching staff from all over the world chat and share their stories from their day, is a powerful memory I'll take away with me from this trip. All of them are united in their commitment to build a new future for Haiti's children.

"From what I've witnessed this week, I think the UNICEF staff are constantly inspired and motivated by the resilience and hope for the future they see in the children they work with. I'm proud to be an Ambassador for an organisation that is so committed to re-building Haiti.”

As part of the UNICEF Ireland appeal for Haiti, O’Callaghan is asking people to donate just 5 Euro per month for a year to help with the immediate needs of the children of Haiti. The ‘Haiti 365 Campaign’ hopes to build on the good work already carried out on the island by UNICEF Ireland, who have already raised and put to work 1.4m Euro.