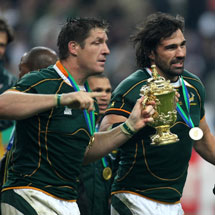 The free-to-air broadcaster, who launched their association with the tournament in 1991, have been awarded the rights by Rugby World Cup Limited (RWCL) for next year’s event in New Zealand and for the 2015 competition in England.

The announcement follows a rigorous process managed by RWCL’s exclusive commercial agents IMG throughout June and July during which five parties submitted bids in response to the tender and subsequent shortlist process for the UK broadcast rights.

Under the terms of the new deal, ITV will broadcast live coverage of every match from the 2011 tournament in New Zealand and the 2015 tournament in England. All matches will also be shown online at ITV.com with the deal also encompassing highlights and clips packages on television, online and mobile.

ITV has a long association with the Rugby World Cup, having broadcast every tournament since 1991. A UK audience of 15 million viewers watched on ITV1 as Jonny Wilkinson’s dramatic extra time drop goal secured England the Webb Ellis Cup in 2003. Four years later, a UK audience of 16 million watched as England finished runners up to South Africa in France.

Mike Miller, RWCL Managing Director, said: “ITV and RWCL have enjoyed a long working partnership. Through its commitment to the sport and exceptional production values ITV has played a central role in the promotion and growth of Rugby and Rugby World Cup in the United Kingdom and we are looking forward to extending that fruitful partnership over the next two RWC tournaments.”

Niall Sloane, ITV Controller of Sport, said: “ITV has a long association with Rugby World Cup and we are delighted to have secured the next two Rugby World Cups free-to-air for ITV’s viewers, particularly as the 2015 tournament takes place in England.”

“Rugby World Cup has provided some of sport’s most iconic television moments of recent decades and – alongside live coverage of the FIFA World Cup, England football internationals, UEFA Champions League and The FA Cup – it is a key part of ITV1’s commitment to high quality live sport.”

Rugby World Cup 2011, the seventh RWC, kicks off in New Zealand on September 9 and will feature the top 20 teams in the world competing across 48 tournament matches. The final will be played on October 23, 2011 at Auckland’s Eden Park Stadium.